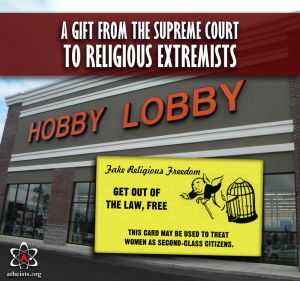 In the last week, the Supreme Court has ruled against women’s health and privacy in two shocking decisions.

In the first, they abolished the 35-foot buffer zone around women’s health clinics in Massachusetts, saying the zealots who verbally abuse patients, while waving pictures of dismembered fetuses in their faces, can go right ahead with their free speech. Apparently, their right to hate speech trumps my right to go into a clinic unmolested.

About 90 percent of women going into health clinics are there for reasons other than abortion. I got my primary care at a Planned Parenthood clinic in New York for several years when I was uninsured. I never had — or wanted — an abortion.

I also never had an unplanned pregnancy because I had access to low-cost contraception — which a second decision took away from women who work for corporations owned by Christian fundamentalists. I’ll bet the ruling would be different had the suit been brought by Muslims or Orthodox Jews.

Without the buffer zone, women who go into these clinics are subject to being filmed. So much for a right to privacy. Protesters sometimes grab them to prevent them from entering the clinic, never knowing whether the woman might just be there for a cancer screening or to renew a prescription. Some of the women going to these clinics are actually seeking help getting pregnant.

But the zealots don’t discriminate.

I saw a video not long ago of a woman whose infant had died in utero. She was at the clinic to have the dead fetus removed, and she fell apart when the zealots started screaming at her. Her husband explained why she was there in an effort to shame the zealots. But they’re so eager to stop one abortion, they don’t care who gets caught in the crossfire.

These are the people who the Supreme Court protected in its decision last week.

In today’s decision, the justices have said Christians — whose company invests in the pharmaceutical companies that manufacture contraceptives — can deny women insurance coverage for contraception.

This means Hobby Lobby’s low-wage workers will be faced with choosing between facing a raging crowd of zealots, who just might turn violent (c’mon, they have a history), just to get low-cost contraceptives, or dying at the hands of a butcher because they can’t run the gauntlet of zealots to get a legal abortion.

No mention was made in the decision of coverage for Viagra and testosterone replacement therapy, which will still be covered — because it’s for men, and obviously, men have more rights than women under Scalia Law.