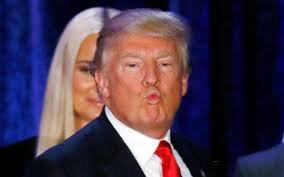 I believe the women.

As an increasing number of women come out and say Donald Trump assaulted them, some of his supporters still snort and say he’s innocent of such things.

But let me tell you, I believe the women. The former writer for People Magazine painted a picture so real I felt like I was watching a video clip.

I have been a woman in the workplace and I know what unwelcome advances are like.

There was the supervisor who turned down the heat in the office so he could see women’s erect nipples. When one of us overheard him bragging about it, we all started wearing loose sweatshirts at our desks.

Then there was Bob, a man at a small newspaper who pursued me every damn day for weeks, even taking to calling me at home with lewd suggestions. When I reported him to the publisher, the man said, “Oh, that’s just Bob.”

So, I went back to my desk, and within a few minutes, Bob was there, suggesting we take a couple hours away from the office.

I asked for his home phone number, and, leering, he gave it to me. I stood up.

“Attention, everyone,” I said. “I need witnesses to this.”

I turned to Bob.

“If you ever utter another word to me that isn’t work-related, I will call your wife. I will tell her what hell you have put me through here at work, and I’ll bet I can find other women to back me up.”

Bob skulked away and behaved himself after that, but I found another job as quickly as I could because I didn’t want to be in the same town as Bob anymore.

Another time, while I was on a sales call, a man cornered me and started groping and trying to kiss me. I managed to get away and he made some remark about how he understood why I was divorced because I was a “frigid bitch.”

My boss found out about it and went to visit the offender, offering to take a baseball bat to the creep if he ever made a move on a person in his employ again. I didn’t need my boss to do that, but it was nice to know a man in a position of authority had respect for me.

There was the company president who didn’t hire me because he didn’t like having women work for him because of their “monthly unreliability.”

I have been paid less than men doing the same work because of my gender.

I have been called Baby and Honey and Sweetie.

I have been talked over and interrupted as though my professional opinion meant nothing.

I have been groped and pinched.

I have been molested.

I have been raped.

Women don’t make this shit up, and when a man admits he can kiss a woman without permission, that he can grab her genitalia, simply because he wants to and he can get away with it because he’s rich and/or famous, that doesn’t come from thin air.

Yes, men talk smack and exaggerate, but when women start coming forward with stories as detailed as these women, when first one, then another, and then another come forward with credible, creepy stories, I tend to believe them.

Don’t start talking to me about Bill Clinton or Bill Cosby as though I somehow defended their behavior because I never have. I have only said that Clinton’s Oval Office blow job was consensual, which it was.

If Trump were running for dogcatcher, perhaps his utter disrespect for women wouldn’t make a difference, although he still wouldn’t get my vote.

But he is running for President of the United States, and he actually has millions of supporters — or at least millions who think he’s somehow a better choice than his opponent.

This is just another example of the rape culture that is so pervasive in American society now. We believe men who make comments like this and then say they were “only kidding,” but we either refuse to believe women who say they have been assaulted or we blame them.

We tell them they were wearing the wrong thing or we were in the wrong place (alone with a male colleague in his office, for example). We shouldn’t have accepted that invitation to talk about an ad campaign over dinner or to work on a project after hours so we could make a deadline.

Or in the case of the People reporter, we interview a man for a story. As a former reporter, I can attest to the fear we sometimes feel when we land alone with someone we think might be a predator. I made it a practice to do interviews in a public place or with people nearby who could hear me if I screamed. I never let story subjects buy me a meal.

Still, there were plenty of men who made suggestive remarks (although there were fewer as I got older) when they thought no one could hear.

So, why don’t we say something then and there?

Because he’s more powerful than we are and he could ruin us, and to defend himself, he probably will. Because we know we’ll catch the blame for the incident in the end.

If you want to support Trump, that’s your choice. If you believe he’s innocent of all charges, fine. Believe what you want. It’s your vote.

However, if you come onto one of my posts on social media and start telling me I have no right to be creeped out by this monster, I will block you.

If you troll on another woman’s post in the same manner, I will block you. Because if you have so little respect for women that you can’t understand why we find him abhorrent in what he says and does, I have nothing in common with you.

My experience with men like Trump is real and I will not allow anyone to invalidate it.