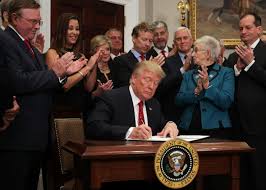 Look at all the happy murderers here, including North Carolina’s own Vivian Fox, Rand Paul and Mike Pence.

Ever since he took office, the current occupant of the White House has been looking for ways to kill access to health care for tens of millions of Americans.

It appears he has found a way to do it without out-and-out repeal of the Affordable Care Act.

In taking away the tax subsidies — more accurately, the payments made by the federal government to the insurance companies — that made insurance affordable for 33 million Americans, and in approving insurance policies that cover nothing more than the insurance companies collective ass, it’s likely we could destabilize the market enough to send us back to 45,000 or more Americans dying every year from lack of access to care.

This is not even taking into consideration the massive cuts to Medicare and Medicaid in the Republicans’ proposed budget, or the failure of Congress to reauthorize the Children’s Health Insurance Program and funding for community care clinics.

In fact, all of this could cause the collapse of our entire health care system.

How is anyone supposed to be able to afford this?

With nobody able to pay the bills, how are hospitals and clinics going to stay in business? Insurance companies might survive, but hospitals will not, except, perhaps, for a few huge conglomerates.

Services that don’t turn a profit will be shuttered, and those include mental health and addiction services.

Soon, more services will go, and that means even the wealthiest Americans will find themselves unable to get the care they need, because even if the 1 percent can afford to pay, that’s not enough to keep anything up and running.

The very wealthiest will fly to Europe for treatment while the rest of us die.

This takes us back to Medieval times, when there was no health care and half of all children died before their fifth birthday. Don’t get too attached to your children because they’re going to die just like my son did.

It’s going to look like a third-world country around here.

And the Republicans in Congress — including my representative, the immoral and thuggish Mark Meadows and Senators Burr and Tillis — have done everything to aid and abet this criminal ever since he stepped into the White House.

After my son died, I left my job to become an advocate and activist. Believe me, there’s no money in this. I don’t do it for recognition, either.

I do this because no one should die the way my son did. I do this because the Republicans have an incredibly effective propaganda machine to spread their lies, and I need to counter those lies.

I do this so your child won’t die the way mine did.

So, instead of getting angry, let’s all call our lawmakers in Washington and tell them to save our health care.

Then, if you live in a state that has refused to expand Medicaid, call your state lawmakers and tell them to get it done.

We saved the Affordable Care Act by inundating Congress with letters, e-mails, calls, texts, faxes and visits. Let’s not let up.

Then all of us — and I mean all of us — need to register and vote to send these thugs home, even if the opposing candidate isn’t perfect. Get over your damn purity tests and put some people in Congress who will do better than the murderers who are there now.

Yes, I said it. Stop being a damn purist. Even if we can’t have Bernie, we can have people who won’t try and kill us by stripping us of our health care.