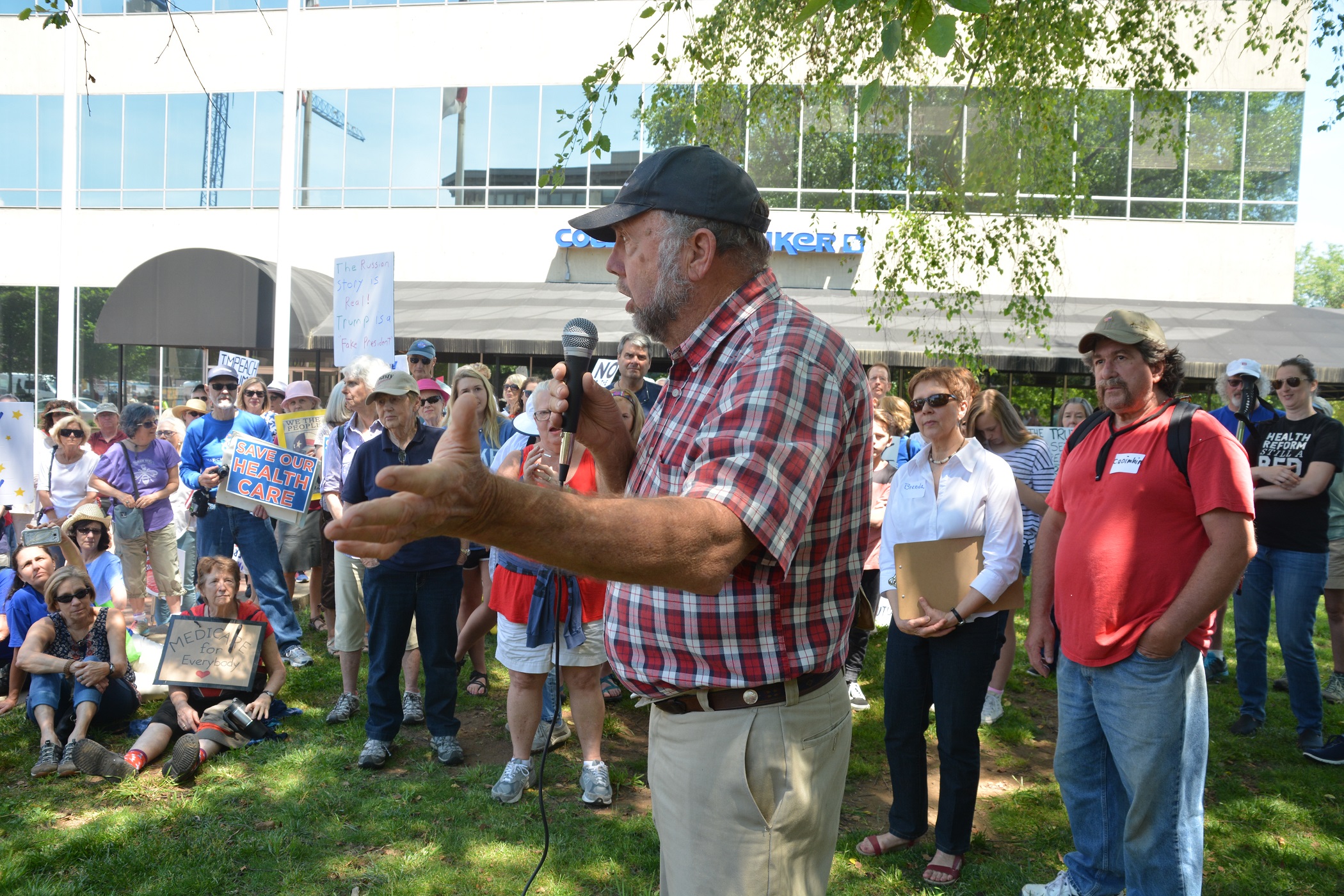 Rep. John Ager is another of the representatives we elected from what was supposed to be a safe Republican district. We did not do it by signing online petitions, but by making phone calls and knocking on doors and getting out the vote. Here, John is speaking to the crowd of about 200 people at the March for Truth.

I don’t even keep count of how many times I’ve been asked to sign one or another online petition, as though it would make any difference at all in public policy.

Let me be honest here — I don’t ever sign them because they are meaningless. Government lawmakers and policymakers don’t give a damn about what we think. They care only about the people who fund their campaigns. That’s it.

Every time someone posts a petition on my timeline on Facebook, I explain that I don’t sign online petitions, and people argue that of course signing a meaningless petition is “taking action.”

No, it isn’t. Sitting at your computer and typing in your name and address is effortless, and the people in power know that. You risk nothing because you have done nothing. They know you’re not likely to get off your butt and take any real action.

A million signatures is one thing, but a million faxes, phone calls, e-mails or visits from real human beings shows them we mean business.

If you want to fill out a form that makes a difference, fill out a voter registration form, and follow it up by filling out a ballot. That’s what will make a difference.

Work to get a worthy candidate elected. Make phone calls, knock on doors. You can make phone calls after work, even for a half hour once a week. Get that candidate’s name out there.

But then something amazing happened. We, his constituents, got mad. Enough was enough. He refused to listen to us, hearing instead only the monied interests who had paid for his election.

I made calls, I showed up to knock on doors, and registered Republicans were happy to hear someone was running against him. People turned out to vote, and we sent that little weasel home.

That was in 2014. So, what happened to the seat in 2016? The Republicans couldn’t find anyone to oppose Brian Turner. He ran unopposed.

Across the county, Nathan Ramsey, a moderate Republican, was elected in 2012, and he was bullied into voting with the extreme right wing of the party.

Something good happened there, too: John Ager, a farmer who had never been in politics, decided to run. Again, his supporters worked hard and he won, both in 2014 and 2016. And no one ever signed an online petition saying his election would be a good thing.

These people who are trashing our Democracy think they’re safe. They don’t care what we want and no petition is going to change their behavior. The only way to make things better is to send them home, and you don’t do that with online petitions.

Not a damn thing, that’s what.

I know the petitions’ sponsors want you to think differently, but petitions are what they use to raise money. You sign their petition decrying the injustice du jour and then a screen pops up asking you to donate money, so — what? They can generate more petitions?

Get up off your butt and get out there. Attend a march, meet other human beings who share your interests and work with them to make change. Meet and talk to the candidates who are opposing those in power. Find out how you can help.

We don’t all have to engage in civil disobedience and get arrested. There are plenty of ways to be active without risking arrest. But we all need to find real ways to contribute because Democracy is participatory, and signing an online petition is not participating, it’s lazy.