Now is not the time to panic 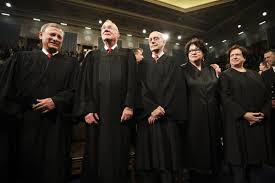 We have much work to do. Let’s get to it.

Justice Anthony Kennedy is retiring, and on hearing the news, most of the people I know and respect felt utter panic.

I felt it too, but then I calmed down a minute and thought about this.

We have had a court with a 5-4 conservative majority for years, even before the creature currently squatting in the White House soiled the linen there.

Justice Kennedy has been a pretty reliable conservative vote. Sure, he saved us a couple of times, but Justice Roberts was the one who saved the Affordable Care Act, not Justice Kennedy.

Elections have consequences. And to all those who wadded up their panties and stayed home on Election Day because the Democratic Party overruled their choice and instead put up a highly qualified, albeit flawed, candidate, this is the consequence — a “leader” who tears children from their parents and puts them in cages in detention centers and makes them go to immigration court alone and unrepresented, a man who brags about his violent tendencies and his sexual adventures, a liar, a racist and a sociopath.

We have this man who has appointed the least appropriate person to every job he could. Every department is headed by a person who wants to dismantle it.

We have a creature who should be impeached for his lies and his profiteering, and a Congress that just wants to take advantage of the chaos to make a profit before retiring.

But now is not the time for panic.

Panic is exactly what the enemy wants to instill in us.

Now is the time to stand up and do the work.

Register people to vote. Knock on doors and make phone calls to educate people. Take to the streets to protest.

We have been in this dark place before. Read the Dred Scott Decision. Read up on the Civil War and its real causes (Hint: It was only about states’ rights insomuch as it meant states had the right to enslave human beings). Read up on how the Chinese were excluded from participation in society in the 19th Century. Look at the numbers of people who were lynched during Jim Crow. Read up on how German-Americans were treated during World War I, and the kind of pressure exerted by Woodrow Wilson to get us into that war. Look at how Japanese-Americans were herded into internment camps during World War II, just because the land of their ancestors was now our enemy. The Muslim ban is nothing new.

This is America, a nation that tends to drift toward its worst nature. We committed genocide to capture this land and used enslaved people to build it. This is our legacy.

But we have shown that we can rise about our worst nature. We have stood up as a people and cried, “No more!” Time and again, we have shed blood to put this country on the right path, and it appears it is time to do so again.

During the 1960s, we committed atrocities in Vietnam and in our own country. We sent the National Guard onto college campuses, and they killed innocent college students at Kent State in Ohio. I still remember the images, the horror I felt that our government would kill its own youth to hang onto an unjust and unpopular war. We beat protesters of that war senseless in Chicago during the Democratic National Convention.

We have been here before. We likely will be here again.

Now is the time to work.

I have made a commitment to nonviolence and I will stand by that commitment. Nonviolence is what got us civil rights in the 1950s and 60s. Nonviolent protest ended the Vietnam War. Nonviolence won India’s independence from Great Britain.

We all need to stand up and register voters, take to the streets, speak our truth to power.

We need to take back the narrative about what’s moral and what isn’t.

Denying the vote to millions of people isn’t moral.

The moral arc of the universe is long, but it bends toward justice, as Martin Luther King said.

I am going to keep doing the work. I’ll get arrested again because the immoral people in power right now don’t want to hear my truth. I may wind up with some real jail time, but I will not stand down.

Democrats in Congress need to stand up RIGHT NOW and play hardball. We all do.

So, instead of allowing panic to consume us, we need to strengthen our resolve and do the work. It’s our only hope.