Nobody “just wants a handout.” Nobody. 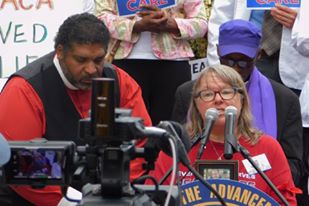 I will continue to tell my son’s story because no one — no one — should die the way he did. This was almost a year ago, hours after Rev. Barber and I were arrested for refusing to leave the General Assembly Building until we had been allowed to exercise our Constitutional right in North Carolina to speak to lawmakers about expanding Medicaid.

Ten years ago today was my first day of life without my precious son. It has been difficult every moment of every day. I live on the verge of tears almost constantly.
I have been and will continue to be very public with my grief because Mike’s is far from the only story of death by denial of health care. We got the Affordable Care Act passed, but opponents are still trying to get rid of it, to go back to the days of killing people like my son because they can’t turn him into a profit-maker. He was denied care until his cancer had spread. That’s when he could turn a profit for Big Pharma. Taxpayers couldn’t spend $1,000 a year to prevent his cancer, but when Big Pharma could make a profit off him, taxpayers were forced to pay more than a half million dollars for his chemo.
Go ahead, call me a conspiracy theorist, but you won’t change my mind.
Here’s what you need to know if your heart aches for me and the hundreds of thousands of Americans whose loved ones have died and continue to die the same way he did and who endure the same pain I do:
Profit-mongers are still trying to kill the poor, the elderly and people with disabilities.
The Republicans’ “health care” bill takes money from Medicaid, the federal insurance program for poor people and people with disabilities. If you think Medicaid is for people who “just want a handout,” think again. Medicaid pays the bills for people who live in nursing homes and for people who live with disabilities. For those who have it, Medicaid is a lifeline.
But the income limits are so low that even disability can put a person over the top and leave them without access to health care for two years, until Medicare kicks in. That’s right, Medicare doesn’t kick in for 24 months after a person begins to receive disability payments. I’ve known people who have fallen into that loophole, and some of them die from lack of care.
Remember, my son, who had no job and was too sick to work, still had to leave his wife to get Medicaid, and his disability took 37 months to be approved. His first check came nine days after he died.
He never wanted a goddamn handout, OK? He wanted to work and pay his way. Until he got sick, he thought the government had no business getting into health care. He changed his mind when he saw what really happens to people, as it happened to him.
I have a friend in Rhode Island, which has expanded Medicaid, thank God, who has a rare disease and can’t work. Without Medicaid, he will die. He is a passionate, funny, smart, kind and caring person. He doesn’t want a handout, he just wants to survive.
My stepfather and my mother both needed to be in a nursing home at the end of their lives. They had both worked and retired in their 70s. Should they have been sent home to die?
If that’s what you think, then go ahead and set your elders and anyone with a disability out onto an ice floe now, because you are condemning them to death.
My son has been gone a decade, and it hurts today every bit as much as it did 10 years ago.
I fought for the passage of the Affordable Care Act because it would lower the death toll, and it has, by more than 20,000 human beings every year.
People who need health care don’t deserve to be turned away. No human being should suffer the way my son did. No human being deserves to die from the greed of Big Pharma, Big Insurance or any other greed-driven entity.
Health care is not a “handout,” it is a basic human right. If you don’t agree with that you are wrong, and if you refuse to listen, you are willfully ignorant — and still woefully wrong.
Let me repeat what I’ve said a thousand times or more since my son died from medical neglect: Nobody wants a handout. Nobody. In all the years as a reporter working on social justice issues, I never met a single person who just wanted a handout. No once. In the decade since that I have worked as an advocate, I haven’t met anyone who just wants a handout. If you think you know someone who just wants a handout, get to know them better because I assure you, they don’t.
I can imagine that some people get so weary from fighting that it might seem as though they’re just looking for a handout, and I have seen that, but no one starts out that way.
If you want to be able to consider yourself a moral person and you think it’s OK to let people die, you need to change your ways.
I start out the second decade without my precious son the same way I started out the first, immobilized by my grief and determined to stop the carnage.
I will fight these purveyors of misery and death going forward as passionately as I have fought for the last 10 years. I will not stop, I will not step back. That’s my promise to my son and I will keep it to my dying breath.