It’s OK to feel overwhelmed. We all need relief. 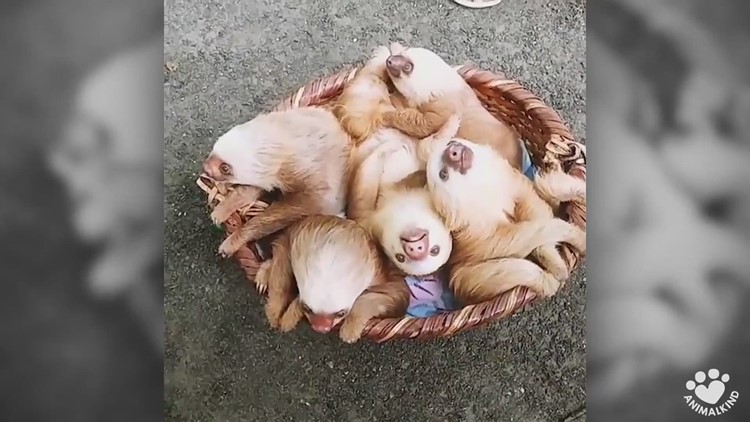 You needed this. You’re welcome.

We’re all feeling it — that sense that something’s about to come crashing down.

I find myself checking my phone for headlines far more than I ever did before, wondering what fresh hell awaits as I do it.

I wake up with a sense of dread over what the fool in the White House is going to do today, and I go to sleep fearful of what he’ll do before the sun comes up again.

Day after day, the outrages pile up — the refusal to disavow racism, and in fact, a flaunting of it, from calling a political opponent Pocahontas because she claims some Native American heritage to saying “some good people” were among the fascists marching in Charlottesville, Va., and calling a black man a “son of a bitch” for taking a knee in protest of racism in America. He refers to countries where people of color are in the majority as “shitholes.”

Every day, some important regulation is rolled back, regulations that govern our treatment of the environment, the food supply, labor, students, women, immigrants and children. If it’s there to protect us from corporate greed, it’s a target.

And Mitch McConnell, a man I like to call Traitor Turtle, protects him at every turn, helping him to dismantle the government. His hypocrisy is breath-taking.

Still, a vocal minority supports them, probably because they love to hate. They love having permission to hate anyone who disagrees with them or doesn’t look like they do. They embrace ignorance, and the Republican party  McConnell leads celebrates their ignorance.

Remember, the Creature admitted to being a sexual predator before he was elected, and he shows no sign of having any respect for women as human beings. He appointed a sexual predator to the Supreme Court and mocked the man’s victim — and the Republicans in the Senate voted to approve this completely unqualified nominee.

I keep asking how much damage will be allowed before we finally put a stop to it.

But there are some bright spots. We’re finally beginning to see some rebellion against the Creature currently squatting in the White House, and it’s great fun to see Nancy Pelosi toying with this overgrown toddler. Her expertise in politics and her intellect stand in stark contrast to his immaturity and ignorance. He’s used to being the boss and of being able to fire or sue anyone who displeases him, and he can’t do that now. The best part of it is that she obviously doesn’t care what he thinks of her. She will not permit him to interrupt or talk over her. She calls him out on his lies. And she does all of it without raising her voice.

And then there’s Alexandria Ocasio-Cortez, who’s driving the patriarchs crazy with her refusal to bow to their idea of how a “lady” behaves in the House and her popular ideas for fixing our broken systems. She just might succeed in leading us away from oligarchy and fascism. I love her mocking of Mitch McConnell. Give her a few years’ experience in the House and I’ll support her for whatever higher office she wants. 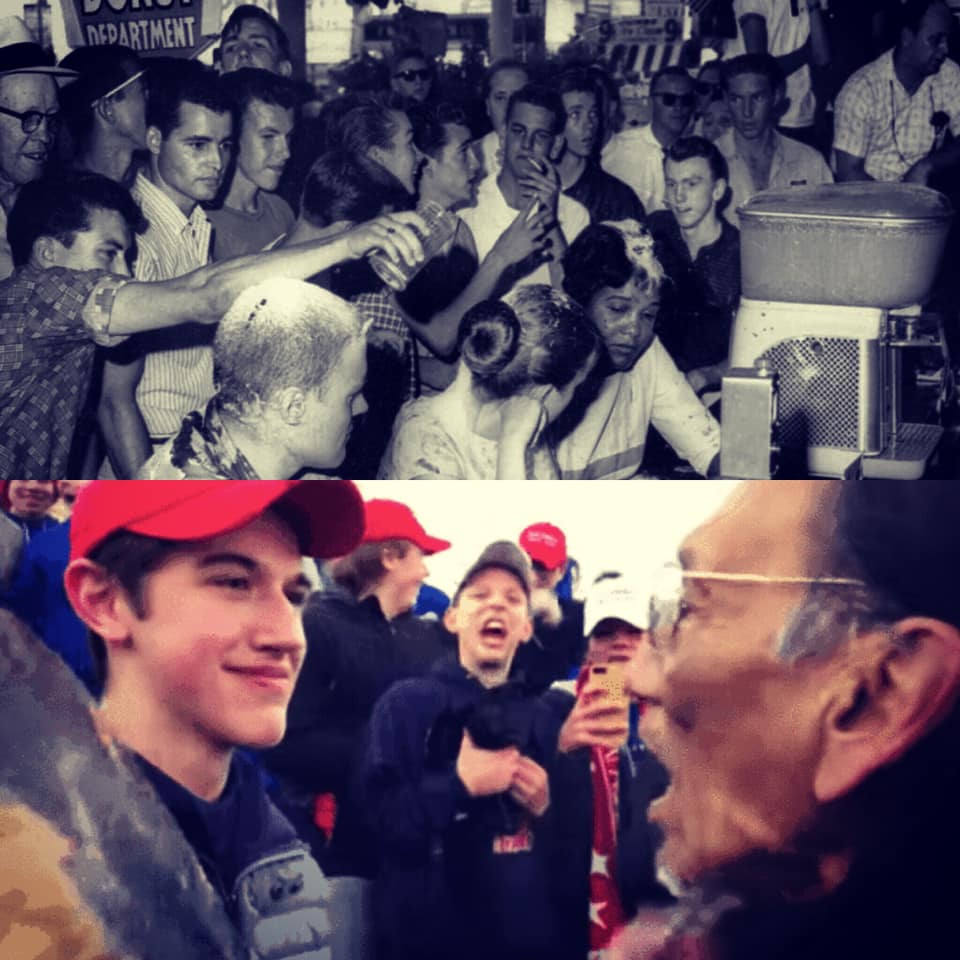 In the 1960s, the top photo helped to change people’s minds about civil rights. Let’s hope the lower photo makes us wake up to the hate that lives among us now.

There’s the way the kids in MAGA hats taunting a Native American went viral with its condemnation of the kids, the school, the young man’s mother blaming Black Muslims for her son’s racist behavior. That kid’s nasty smirk is up all over social media, as are those of his classmates. His racism, his sense of white entitlement, have been roundly trashed.

But too many Native Americans still live in abject poverty as our government keeps trying to exploit their sacred lands for profit.

Too many African-American children go to schools that are ill-equipped and falling apart, and then are targets for cops with guns, who claim to be in fear for their lives even though the victim was unarmed — and then they get away with murder.

Too many LatinX people are afraid to live their lives — whether or not they are documented.

Too many people of every race and ethnicity are poor or living on the edge while our government refuses to raise minimum wage to a living wage. Instead, they cut taxes on the wealthy and impose more taxes on the poor, all while calling people who need help “lazy.”

Too many young people are forced into the military to fight our needless, profit-producing wars on foreign soil through the poverty draft — a promise of benefits after four or five tours of duty in combat zones. And when these young people finally come home, suffering from depression and PTSD, we ignore them.

And, still, too many people are dying from lack of access to health care.

No, I won’t give up, and neither should you.