Good riddance to Paul Ryan and friends. Now let’s get to work 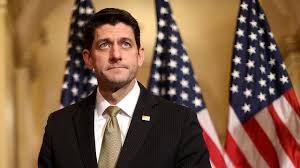 Thank God and Greyhound he’s going. But it’s not enough. We need to begin to fix the damage he and his cronies have done.

This does not count the four Democrats and 11 Republicans who have left already.

I can’t remember an exodus like this from Congress. But then, I’ve not known such cowardice and lack of ethics on such a scale in my lifetime, and I lived through Nixon.

This group of Republicans has allowed a toxic narcissistic sociopath, a liar, bully, con man, racist and misogynist free rein for more than a year. They have refused to protect the special prosecutor who is investigating very real crimes this creature likely committed, while relentlessly attacking the woman who should be in the White House to draw attention away from their own crimes.

They have stolen much of America’s treasure, allowed polluters to poison our air and water, stolen public lands, saber-rattled with nuclear powers, attacked anyone who tried to stand up to them and ripped apart families at a record rate just to keep out anyone they deem as “other.” They don’t care that crops are rotting in the fields because they know they have enough money to buy whatever they need, even if others of us starve.

They have sold off prisons to people who are making a profit off of other people’s misery.

They have allowed gun manufacturers and extremists to dictate a horrific lack of gun policy.

They have attacked voting rights to the point that our elections no longer are deemed fair. And their theft of a Supreme Court seat has made them safe for another decade or longer.

They have impoverished millions by refusing to increase the minimum wage, which now is about one-third of what it would be if it had kept pace with inflation. They have choked unions to death to make sure workers have fewer rights now than they have had since the 1920s.

And after these millions have been impoverished by the Republicans’ corrupt public policy, these affected people are vilified as lazy, even when they work two jobs and still can’t make ends meet.

I believe the leadership of the Republican Party knew about Russian interference and they welcomed it. I believe they’re in it up to their eyeballs. Otherwise, they wouldn’t have threatened then-President Obama when he wanted to make what he knew public. He didn’t know how extensive the conspiracy was, but I think the Republicans did because I believe they were part of it.

This class of crooks came to Washington to enrich themselves and their uber-wealthy co-conspirators. They came to pick our collective pockets and now that they’ve been found out, they’re going to abscond with their booty.

The problem now is that the Democratic Party is about where the Republican Party was under Nixon, and true progressives are being squeezed out. Our alternative is the Green Party, which can’t win major elections because of the power of the two corrupt parties that hold power now.

A blue wave in November might improve things somewhat, but it likely will not be the change we need. It might mean a few patches to the huge tears in the fabric of our nation, but what we need now is radical change.

I’m part of the new Poor People’s Campaign: A National Call for Moral Revival because I don’t think politicians are going to bring about the changes we need without some kind of revolution, and I’m standing for a peaceful one.

So far, 41 states and the District of Columbia have organized to be part of this campaign. Each organization is unique to its own state because each state’s needs are unique. But beginning on Mother’s Day, we will be seen and heard in state capitols and in Washington.

Right now, more than 40 million Americans live in poverty while there’s actually more than enough to support everyone comfortably.

We need to stand up to the powers of corruption and greed and we need to do it now.

Demand a just society. Demand it and mean it, or it never will happen.