Can love win? I hope so 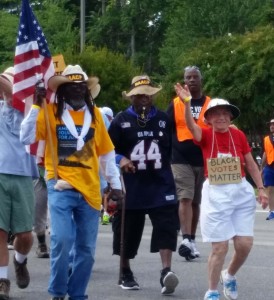 Middle Passage and “Granny” Ruth Zalph walking along Highway 401 in North Carolina during the NAACP’s Journey for Justice last year. We are called to stand up for justice, we are called to love one another, now more than ever.

The sun came up again this morning.

Yeah, somewhere deep down I knew it would, but I was still just a little surprised.

My husband spoke to our financial advisor, who said we’re OK for now. I’m not sure I believe him, but his voice was soothing and calm.

So, now begins the fight on a national level. I will keep the news turned off, since I blame the corporate media for this mess we are in. They jumped all over Hillary’s e-mails while allowing Trump a pass on all his criminal activities.

The upshot is, what has happened here in North Carolina in the last four years is about to happen nationally.

I will lose my access to health care for at least the next year (in 11 months and six days I can get Medicare — if it still exists), as insurance companies take advantage of the repeal of the Affordable Care Act and once again refuse to sell policies to anyone who might get sick.

My LGBTQ friends will lose their rights to be married to the people they love.

My African-American and LatinX friends will lose access to the ballot box in larger numbers than we have seen in a half century.

Multi-national corporations will pull out in protest and people will lose their jobs.

At least 20 million people will lose their access to health care. Thousands will die.

We’re likely to get into some real and nasty wars. Tens of thousands will die.

Climate change will continue its inexorable march, and perhaps millions will die.

This is what I can see from where I sit, in a state where much of this is happening already.

But we here in North Carolina have developed a coalition of groups and individuals who are answering this hate with love. We have been using nonviolent protest to send our message, to change hearts.

We haven’t won the war, but we have banded together and we have the love and support we need to continue this fight and take its model across the country.

Hate won the election, I will not let it conquer me. I will stand with my brothers and sisters against injustice, against hate.

I am a follower of Jesus, who taught me that I need to love my enemies, as difficult as that is this morning. Gandhi and Martin Luther King followed in the steps of Jesus — not the Jesus of the modern American evangelicals, but the one who spoke the word of justice and love, the one who embraces the poor and marginalized, the one who went to his death for what he knew was right.

Not all of us will survive this fight, but we must engage in it if we are to survive as a society.

We are entering a dark age. Let us be the light.