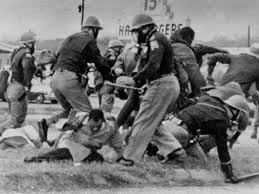 Racist violence by police has been with us for a long, long time. The Civil Rights laws of the 1960s were supposed to end that. Unfortunately, it’s still with us.

Last August, Johnnie Jermaine Rush, a young African-American man, was walking home after work. It was late at night and I imagine he was tired and ready to kick back and relax.

He walked across the street near McCormick Field, and he was stopped by Officer Chris Hickman and an officer trainee who was with him that night. They claimed he was jaywalking, which isn’t really possible where he crossed because there’s no crosswalk. To make the charge even more absurd, tens of thousands of baseball fans cross in that same spot every year before and after baseball games, and there are no jaywalking tickets issues to any of them.

Rush got scared and ran. I say he was justified, especially since Hickman caught up with him and beat the crap out of him.

To be clear, I think real change means that any new procedures have to work, and I think the sergeant who called Rush a liar should be fired. That’s the only way you prove we mean it when we say zero tolerance.

Asheville Police Chief Tammy Hooper took away Hickman’s gun and put him on administrative duty and reassigned the trainee to another officer. It took four months for officials to decide he should leave the force, even though a review of all his body cam footage revealed other incidents, and he was allowed to resign. The body cam footage was not made public, thanks to a law passed a couple of years ago by the state’s Republican-dominated General Assembly.

Two months later — six months after the event — someone leaked the footage to the Asheville Citizen-Times, which made it public.

The first reaction of those in power was that they wanted to investigate who leaked the video.

But the pressure was on, so everyone began to act outraged by the video. They were shocked, shocked, I tell you, that such a thing could happen.

But this is not a new problem. Malfeasance has been discovered again and again, the most recent fiasco being the disaster that was the police evidence room, where record keeping was so bad that no one was able to figure out what was missing.

So the mayor and city council released a statement saying how angry they are.

I say they don’t get the luxury of anger because their job was to prevent this kind of incident. They are responsible, especially Mayor Esther Manheimer, and she needs to resign. The police chief needs to go, too, and any member of City Council who knew about this. They don’t deserve another chance.

Now that it’s out there, the mayor and council are outraged, of course, and the statement again made a promise of zero tolerance for this kind of thing. Meanwhile, Hickman, 31, was still free and not charged with any crime.

Perhaps because officials finally realized that actions really do speak louder than words, Hickman was arrested and charged with felony assault by strangulation, and misdemeanor assault inflicting serious injury and communicating threats. He is free on $10,000 unsecured bond.

The statement released Wednesday by the mayor and city council promises we’ll do better, but those promises have been made before.

You want us to believe you mean it? Disband the entire police force and don’t rehire anyone who doesn’t pass a rigorous psychological evaluation. Get rid of the bullies and amend the union contract to prevent these violent, racist people from getting away with this kind of behavior.

The council’s statement said, “… Finally, a word to our police officers who viewed this video and were angry or ashamed, or otherwise rejected what you saw. We say thank you. We welcome you to stay and continue the transformation of our police department into one that reflects the best policies and practices available. Likewise, to any officers who may not have been disturbed by this, we want to make it clear that Asheville has zero tolerance for racism or excessive use of force by our officers.”

These words are meaningless when incidents like this aren’t dealt with until someone leaks the video to the press. And when officials’ first reaction is to call for an investigation into who leaked the footage, when it takes a full week for the mayor and council to issue a statement, you’ll have to excuse my cynicism when I call bullshit.

I want to know how many more incidents like this — or even worse than this one — are being kept secret. Just because body cam footage isn’t in the public domain doesn’t mean you can use that to hide violence and racism on the force. I want to know if there are corpses hidden in secret video footage. I have no trust left. None.

I am angry. I am outraged. And I am furious at that statement because I don’t want anger from city government, I want results. Period. I want the mayor and the police chief to resign. I want the police sergeant who called Rush a liar fired, and I want the trainee who didn’t stop the beating to be fired.

Finally, I want assurances that council will implement real change instead of just talking about it.