The death of American journalism 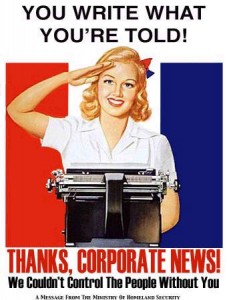 So, here’s what we’ve come to: Donald Drumpf’s penis size is all over the news this morning, but Bernie Sanders, who’s talking about real issues, real problems and real solutions, can barely get the time of day.

I get it; penises sell. Everyone’s interested in the discussion about penises.

A responsible Fourth Estate, however, would walk away from the circus and talk about income inequality, systemic racism, the lack of access to health care, the ravaging of our public education system, endless wars, the rampant destruction of the natural world, climate change, poisons in our food and water, voter suppression …

You get the gist.

What we get instead is the distraction, what my late son used to call “sparkly issues.”

“Ooooh, look over here. The leading Republican candidate is talking about the size of his penis. Sparkly!”

I worked in newspapers for 30 years before I volunteered to be laid off so I could pursue a life of activism after the death of my son. I’m deeply grateful I left when I did.

I was fortunate to be a reporter at a time when news stories might shame state and local officials to do the right thing. Stories my colleagues and I wrote helped to change state policies.

But those stories took time to research and write, and they weren’t sexy. It was my job to explain complex government policies and how they affected real people. My colleagues and I were given the time it took to do the research and write the stories.

Today, my former colleagues work harder than ever, but they aren’t often given the time for investigative journalism. Corporate overlords have cut newsroom staffs to the bone and then some. Older reporters who remember what it was like to write about corruption or bad policy are overloaded with work. They can be disciplined for not having enough bylines. Story count means more than content.

Too often, today’s journalists aren’t encouraged to tackle the issues; they’re asked to contribute to the drivel that distracts people from the real issues. I have some very frustrated friends in the business, and none of this is their fault.

When I criticize the corporate media, I am in no way blaming the front-line people for what has happened.

The decisions about what will be at the top of the news don’t rest with reporters, or even most of the editors who work with them. Much of it comes from the corner offices in the form of kudos for the number of page views online and demands for more of the same.

My former company, Gannett, is in no small part responsible for this mess. Newspapers aren’t dying; they are being suffocated. Gannett demands obscene profit margins, and when the profits aren’t big enough, the company boots a few more reporters and copy editors to the curb. Employees may be loyal, but the company most certainly is not.

News became a product, not a mission, and that’s what is killing newspapers.

So, my former colleagues work in a pressure cooker, where they face increasing demands, minuscule raises that don’t keep up with inflation and the constant threat of unemployment, no matter how good they are.

Most reporters are still trying to do good work, and some have left corporate media to pursue good journalism.

Here in Asheville, we have Carolina Public Press, a nonprofit headed by a former Gannett reporter, and The Asheville Blade, a one-person operation covering local government and issues. We have some great bloggers who are as likely to break stories as the local paper or TV or radio stations.

This well may be the future of journalism, but it has a lot of noise trying to drown it out, and the rise of Donald Trump and the coverage of his penis size is sad proof that we may not return to civilized, responsible journalism any time soon.