Today marks 13 years since my son called me to say he was feeling better because the doctor found and drained a couple quarts of fluid from his abdomen.

We didn’t know why the fluid was there, but in the back of my head was the fact that fluid like that is a symptom of end-stage cancer.

A week later, we found out that was the cause, that the cancer was back and nothing could be done to cure it. He had, at most, a year to live. He would die just six weeks after getting the news.

This year is the 13th time I have relived this seven weeks, and I still have to lament that we are no better off than we were in 2008, when I promised my son I would work for access to health care for every human being.

In fact, things have gotten even worse. Where some 45,000 people were dying every year from lack of access to care in 2008, that number has been revised upward to 68,000 now — and that estimate is from before the pandemic began.

We had 35 million people with no insurance. We still have that many, plus another 45 million or more who can’t gain access to care because of sky-high deductibles. In a time when nearly half of Americans say they can’t pay a $400 surprise bill without borrowing money, 70 percent of employer-sponsored policies have deductibles over $1,500, and the average deductible on a health insurance policy is over $3,000.

Today, I live in one of 12 states that have so far refused to expand Medicaid to cover everyone living in poverty. I have tried calling, writing, visiting and pleading with the Republicans in charge to accept the billions of dollars in federal money to cover people whose incomes can’t cover insurance. These are people making minimum wage. Many of them already have chronic conditions that they can’t manage without care, and that will kill them prematurely.

In North Carolina, three of them will die today.

Three more will die tomorrow, and the next day, and the next, just the way my precious son did 13 years ago on April 1.

I have been arrested three times in Raleigh, trying to talk to legislative leaders about access to health care. I was not violent or even threatening. I asked to speak to leaders and was told they weren’t there, even while I could see them sitting there. I offered to wait because what I had to say was so urgent. Instead, I was arrested and hauled off in zip-tie cuffs.

I had hoped to see some improvement by now, but the Affordable Care Act has been so sabotaged by insurance companies and other monied interests that we’re actually seeing more people die from lack of access to care than we did 13 years ago, and we have more people who don’t have access to care.

I promised my son I would work for access to care for everyone as long as I have breath in my body. I have kept my promise. But I really hoped we’d have seen some progress by now. Instead, we’ve been skipping happily backwards, giving insurance companies, Big Pharma and the rest of the crooks everything they want, while keeping us fooled that we’re doing better because pre-existing conditions have to be covered and young people can stay on their parents’ plans — as long as their parents can afford to have insurance plans.

I’m exhausted. I’m stressed. I’m grieving. I’m frustrated. I have all but lost hope that we can get anything done.

But I will not stop.

You can help in this fight. Every one of you can call legislators at the state and national level and let them know you need to see improvements if they want to keep their jobs. Demand that every candidate tell you how they plan to improve health care access.

Then, you need to vote as though health care matters to you, because health care needs to matter to you.

You need to care that people are dying every day from curable and/or preventable causes.

My son would be a lawyer now if he had survived our broken system. He would also be a proud jackass, a master of inappropriate humor and practical jokes, a dedicated volunteer helping people get and stay sober, a man with a brilliant mind and a kind heart.

Those of us who loved him still grieve every day over this hole in our hearts that won’t ever heal.

This has to stop. We have to demand better, and we need to demand it now.

Your greed and ignorance are not harmless 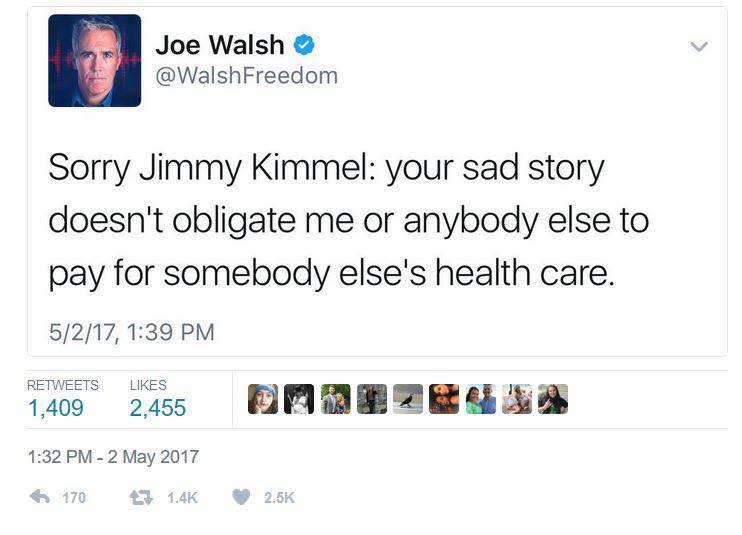 The right wing in this country loves to blame the victim.

Poor people are lazy and don’t deserve any help.

Sick people are at fault for their own illnesses.

Women deserve to be raped.

People of color deserve to be shot in the street, even when they’re unarmed.

They also expect the things they want to be paid for — you know, the roads they drive on, the electrical grid and the water systems they use, the military that gives their tiny dicks a hard-on.

Their attitude is “I got mine, get your own,” as they pass laws that make it impossible for others to get their own.

If you haven’t seen it, you need to watch Jimmy Kimmel talk about how his newborn son almost died but was saved because he had good insurance.

No one should have to watch a child die from neglect the way I had to.

And then Rep. Mo Brooks (R., Alabama) claimed that if people live a “good” life, they won’t “get” pre-existing conditions.

I had someone come onto my timeline this morning on Facebook who buys into that crap, hook, line and sinker. He claimed that people with pre-existing conditions should have taken better care of themselves, that their conditions come from personal choices.

I called him on his bullshit and he claimed it wasn’t victim-blaming, but a harmless point of view.

No, your point of view is harmless only if the outcome doesn’t harm someone. If you take away the pre-existing condition clause of the Affordable Care Act, more people will die the way my son did. That is not harmless.

My son was in no way responsible for having a birth defect. It was in no way his fault that he couldn’t find a doctor in Savannah, Ga., who would let him pay for his care in installments. My son did not choose to get colon cancer, and nothing in his lifestyle caused it. But my son died because he didn’t have — because he couldn’t get — insurance.

I have been healthy all my life, but I developed asthma a few years ago. Having insurance means I can manage it and it doesn’t get worse — and more expensive to treat.

My best friend developed type 2 diabetes in her 50s because she has a genetic predisposition. She exercises every day and eats very, very well. Because her insurance also pays for glucose testing supplies, she can manage her diabetes. Without insurance, she would develop life-threatening — and extremely expensive — complications.

My husband’s family has heart disease all through it, so no matter how much he exercised, no matter how healthy he chose to eat, he still developed coronary artery disease and needed bypass surgery, which saved his life.

My son didn’t deserve to die, but people still try to place the blame on him.

When I went to speak to a newly elected state senator about health care and told him Mike’s story, his first question was, “Was he working?”

But then I had a question for him: “When did being unemployed become grounds for the death penalty? When did death for unemployment become part of the penal code?”

He had no answer. But he’s still against expanding Medicaid in North Carolina because he still thinks it’s OK to blame the victims of our society’s greed and self-centeredness for their own suffering.

Perhaps that’s more comfortable for them than facing the truth — that public policy is a moral thing, and that their willingness to let people die rather than have compassion for them is immoral on its face.

The person on my Facebook thread this morning asked why I get so upset over his “harmless opinion,” and I told him his opinion is neither harmless nor correct. I had pulled four instances of people with pre-existing conditions that were not their own fault. I had told him about how his opinion had led directly to people’s deaths, and he persisted in saying people are responsible for their own pre-existing conditions.

What’s worse, he said I should know that children can stay on their parents’ plans until they’re 26. He was unaware that that’s a piece of the Affordable Care Act, and that’s not my opinion, that’s fact.

Until 2012, you were off your parents’s plan at age 19, unless you were a student and then the cutoff was 21. And if you had a pre-existing condition like little Billy Kimmel’s heart defect or my son’s birth defect, you somehow deserved to die.

It’s time we face the immorality of our public policy on health care, on the minimum wage, on education, on workers’ rights, on the environment, on housing, on income inequality.

It is not the fault of the victim, it’s the fault of every one of us who believe selfishness and greed are “harmless opinions.”