All of a sudden, I’m seeing a ton of ads for stock trading on my Facebook feed. And as soon as I hide one, another pops up.

I’m looking at these in the light of the Robinhood/Game Stop fiasco this past week. This was a scheme by rich people called shorting, where they manipulate the stock of a company (in this case, retailer Game Stop) they’re betting is about to fail. Last week, middle-income people who saw this happening, went to the online trading company, Robinhood, and bought so much of the stock as a group that the price rose precipitously. The Robinhood traders made millions selling this stock back to the wealthy traders. The rich people lost a ton of money, so trading was stopped to protect the wealthy.

So now, we’re seeing ads for “discounted” stocks all over because rich people are going to prey on the hopes of people who can’t afford to gamble with these schemes.

Headlines are promising unimaginable wealth from new tech stocks, or 50 percent off trading fees for hidden gems in the market. I have hidden the ads of one company (Motley Fool) three times in an hour.

I get emails from Experian every day — every damn day — telling me I can have this credit card or that one to “rebuild” my credit rating.

I cut up all my credit cards two years ago after struggling for years to get them paid off. One of the most popular ways to get people to keep their debt is to offer another card at lower interest rates, say, 12 percent, for the first year. They’ll transfer your balance.

They’ll leave $1,000 or so on the original card, so now you have another payment to make, and in times like these, the minimum payment is all people can afford to make. And, since you now have a credit card that isn’t maxed out, when the car breaks down, you put the $1,500 bill on the now-almost-cleared card, at — you guessed it — 26 percent interest.

I struggled with this for years before I finally figured out I’d already paid more than double what I had borrowed. I cut up all the cards and signed on with a debt-reduction service. Instead of struggling to pay nearly $1,000 in credit card bills each month, I pay about one-third of that. The downside is that I have a crappy credit rating. I mean, really crappy.

That means I have to pay a higher interest rate if I borrow money. But with $600 a month freed up, I can pay cash for what I need. I don’t need credit for everyday expenses anymore. The debt-reduction service is negotiating settlements with all four credit card companies, and I’m able to save a little money for when I have a big expense.

For the first year, these credit card companies filled my inbox with threats of court action, but the service I contracted with told me not to even acknowledge those threats, and after a year, they stopped.

Wall Street and Big Credit don’t want you to know these things, and I think the rich are rather amused at our efforts to catch up and live debt-free.

They punish us with a bad credit rating if we don’t play their game, and your credit rating is everything. It’s even used to determine whether a company will hire you, whether you can rent an apartment and have a roof over your head.

If you can get an apartment by paying three months’ rent up front, you’ll also have to pay a hefty deposit — perhaps the equivalent of three months’ service — for utilities.

If you can get a loan, it will be much more expensive because you’re going to pay a much, much higher interest rate.

These are the ways our current system extracts the last drop of blood from the poor. It’s how they drive middle class families into poverty, where they, too can be exploited.

Historically, it reminds me of the way my grandparents had to live in company housing and buy from the company store as employees of textile mills in the late 19th and early 20th centuries. You never had quite enough to cover everything, so you just went deeper and deeper into debt, so the company pretty much owned you.

We the People are not being represented in Congress anymore, they are. That’s why minimum wage hasn’t budged in more than a decade, even though the cost of living is three times what minimum wage is now. That’s why interest rates that once were illegal are now considered low. It’s why car title companies and payday lenders are thriving.

We’re not supposed to be able to dig out.

We’re entering serfdom from the first time we borrow money, and now credit card apps are available for children to teach them how to “manage debt,” so we’re not even able to reach adulthood anymore before being ensnared.

And nearly half of us are voting for people who stand against helping any of us dig out.

I can’t say what the solution might be except to push the new Democratic majority to change some laws: 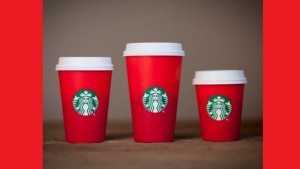 Really? You’re outraged over a coffee cup design? Perhaps you need to rethink the meaning of “Christmas.”

Once again, “Christians” are claiming they’re being attacked, this time because Starbucks has introduced plain red cups for the holiday season.

Let me say a few words to “Christians” who are disturbed by this.

First of all, Starbucks is a business that serves people of all faiths,” not just yours.

Second, if you are so self-centered that you think your particular brand of Christianity is the only faith that ought to be recognized, you are about as far away from the teachings of your “Savior” as it gets.

Jesus taught humility. He taught love and acceptance. And he didn’t celebrate Christmas. He did celebrate his birthday, I imagine (I can’t imagine why anyone wouldn’t), but it was at the time of harvest — most likely in September, not December.

The celebration of Jesus’ birth was moved to December to recruit Pagans into the new religion, since this is when most major religions celebrate the winter solstice, or the return of the light. The Christmas tree is another Pagan tradition. You don’t think Jesus actually bought an evergreen tree and decorated it do you?

As for the Christmas avarice, that’s a relatively new invention. Originally, there was a feast to celebrate the birth of the Christ. Then people started giving foods — nuts and fruits, mostly. Then came small gifts — children left their shoes or stockings out to be filled.

Then came the greed. By the mid-20th century, people were going into debt to buy crap recipients didn’t need and often couldn’t even use.

Now comes the hubris of demanding everyone recognize your holiday, whether they observe it or not. Jews, Muslims, Pagans, Buddhists, atheists — it doesn’t matter. Not only are they expected to wish us a merry “Christmas,” we are allowed to wish them the same, no matter what they observe.

And “Christians” seem to see nothing wrong in this. They have become so self-absorbed that no one else matters — the exact opposite of what Christ (whom they claim to worship) taught.

So, yes, I will wage war against “Christmas,” as long as it is a celebration of greed and consumerism.

I will, however, celebrate Christmas. I will spend money only on materials for handmade gifts. Sorry, kids, no Target gift cards this year. Perhaps I will give you art and craft supplies and offer to teach you to knit or crochet. Perhaps, if you have asked me for recipes, I will print our a bunch of mine and put them in a binder so you can start your own cookbook.

When my younger son was alive, he celebrated Christmas by making a huge dinner and inviting people who had nowhere else to go. And he was never, ever offended by someone who wished him happy holidays, because like me, he believed that phrase included every holiday between Halloween and Martin Luther King Day.

This “war on Christmas” was designed to distract people from real issues like disastrous social, economic and ecological policies. You can’t fight for the climate, for education, for health care, labor rights, voting rights, etc., if you’re obsessed with fighting a supposed war on a holiday.

You claim to worship Christ, then perhaps you should look to the red print in the New Testament for guidance on how to treat people and for the real reasons to be outraged, because you should be really furious about the things going on around you.

I am outraged by the war on the poor, and even more on the impoverishment of millions of people whose jobs were shipped overseas and then replaced by low-paying jobs that don’t provide enough to make ends meet, even though people are working harder.

I hate everything “Christmas” has come to stand for in our culture. I hate the must-have attitude. I detest the car commercials that suggest someone deserves a $25,000 gift for Christmas. I hate the way children start making lists in September because they’re taught greed is good.

I hereby declare a war on “Christmas,” so that I can celebrate Christmas.

I will not set foot in a mall between now and New Year’s. I will go to the yarn store and the art supply store. I will buy handmade from local people or make it myself.

I will not go further into debt.

I will drop off some handmade scarves and hats at Beloved House here in Asheville to help keep people warm instead of vilifying poor people and blaming them for their circumstances. After all, I don’t recall Jesus asking people if they made bad choices as teenagers before he helped them.

I will attempt to be kind and generous in the spirit of the one whom I celebrate.

So, to all my Christian friends, I wish you a merry Christmas; to those of other faiths, I wish you the happiest of holidays.