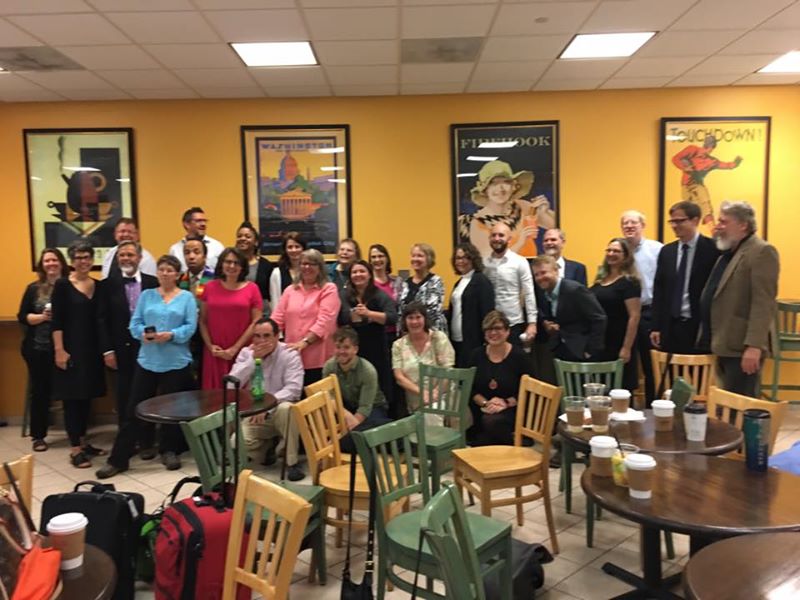 Most of the 31 arrested on July 25 for disrupting the Senate. One person couldn’t get to Washington for our court date and three more were getting invasive drug testing.

I have learned first-hand how arbitrary and cruel our “justice” system can be.

Thirty-one of us were arrested July 25 for disrupting the Senate by chanting “Kill the bill!” as the Senate voted to open debate on a bill that would strip access to health care from 33 million Americans.

We were taken to a warehouse to be processed, and 29 of us were given an appearance date for court and released. Two of our number were sent to jail overnight. It appears they were picked at random because all of our charges were the same. Two of us, Jennifer “Jeff” Ginsburg and I, had charges pending from an arrest in May at the North Carolina General Assembly Building, but Jeff was jailed and I was released.

Later, 29 of us were offered a deferred prosecution agreement that requires four months arrest-free, a four-month ban on entering the US Capitol Building and 32 hours of community service. Another was offered a deferred sentencing agreement, which requires a guilty plea that will be set aside after 48 hours of community service and six months arrest-free and a six-month ban on entering the Capitol Building.

I alone was offered nothing in advance.

I had no idea what that meant and the prosecutor would not explain it to my attorney, so I went to court not knowing what they had planned for me. I was a mess.

Was I going to be thrown in jail?

Was I going to be fined some large amount of money that I didn’t have with me and couldn’t pay on the spot?

Why was I singled out?

Because they can, that’s why.

When we got to the courtroom, the prosecutor offered my attorney the deferred sentencing deal for me.

It seems they were just playing with my head. Whether that was their intention or not, it it worked. I was really scared.

I made arrangements with Jeff that she would call my husband and get my car from the Metro station where I had parked. She would take my purse and my crocheting. Organizers of the protest, Rev. Rob Stephens and Rev. Robin Tanner, promised I would not be abandoned and as we entered the courtroom, everyone surrounded me and promised their support.

When the prosecutor read the description of what I had done, she claimed I had been in the Gallery. The judge asked whether the account was accurate.

“No, sir, it is not,” I said. “I had been told I could bring in a photo of my late son. It was a 5×7, unframed. A few minutes later, I was escorted from the gallery for having a poster. When the chanting began, I was in the hall. I didn’t begin chanting until people began being brought out. That’s when I joined them.”

The judge was clearly irritated, and I thought for a moment he was going to dismiss the charges, but the prosecutor convinced him that because the door was open I was just as guilty as anyone else.

The judge offered to let me plead not guilty and go to trial, but I chose to accept the deal. Before we left, though, I added one more thing.

“Your Honor, I need to tell you that that 5×7 photo is all I have left of my son. He died from lack of access to care in 2008. The Affordable Care Act would have saved his life.”

That’s right, I played the Dead Kid Card and I’m glad the prosecutor got to hear why I wanted to carry that “poster.”

But I am left with the memory of how frightened I was, about how the system is allowed to be cruel and arbitrary. And if I was as frightened as I was, even with all the support I had, I can only imagine how a young person of color feels when arrested alone.

The police treated us all with respect, except for the ones who spent the night in jail. I’m told their demeanor changed as soon as the decision came down to transport those two people to jail for the night.

None of us was told why we were singled out for more severe treatment, leaving me to believe that it was done to intimidate all of us and make us question whether we’ll be the one to spend time in jail or not offered the same agreement as the others if we do civil disobedience again.

In fact, we went into our civil disobedience thinking we would get “post-and-forfeit,” fined $50 and released. We were a little surprised at the charges and at having to come back for court. We were told this was a possibility, so we went in with our eyes open, but we did not expect to have one or two people singled out for more serious treatment each step of the way.

I have learned a lesson here: No one is safe in our arbitrary “justice” system. We need reform. We need it now.

This has not been an entirely negative experience. I have made new friends, new allies, and they have enriched my life.

And as scared as I was, my resolve is the same as ever. I will continue to put my body on the line to protect people’s access to safe and affordable health care. I will not go away.

I will avoid arrest for the next six months, I will do my community service. But I will never stop working for access to health care for every human being. I’ve already endured the loss of my precious son. Nothing can be worse than that.

March 26, 2011 a world of progress Comments Off on Walker is arrogance personified

Apparently Scott Walker believes he doesn’t have to listen to the courts any more than he has to listen to his constituents.

Walker, Wisconsin’s ultra-corporate-friendly governor, has decided to publish the anti-labor law he illegally pushed through the state senate. The law strips most public sector unions of their collective bargaining rights.

Legislative Reference Bureau director Steve Miller said publishing the law in the Internet doesn’t mean the law takes effect Saturday. He says that won’t actually happen until Secretary of State Doug La Follette orders the law published in a newspaper, and a judge ordered last week that La Follette not do anything.

But Walker says the act of publishing the law online makes it effective, and he intends to enforce it before the state’s Supreme Court decides on the lawsuit facing it. He apparently is above the power of the court that issued the restraining order. He can play with the rules and not have to answer for it.

The law is possibly the most blatant attack on labor since Ronald Reagan began the law against working Americans by firing the air traffic controllers, and seeing Walker’s success, other states are following suit.

By the mid-1980s, when I was working as a newspaper reporter,  a business could be sold and the new owner come in and settle with the strongest union and then screw the rest of the employees. I watched it happen at the Herald News, when the Drucker family sold the paper to Dean Singleton’s Media General.

Singleton came in and promised a rosy future for the paper, settled with the Teamsters, and nine days after taking over, laid off a third of the newsroom staff and  reduced benefits for those who remained.

He told the union members that if they didn’t negotiate “in good faith,” he would cut off their health benefits.

That’s how he broke the union in Passaic, NJ. He went on to become notorious for buying up newspapers and slashing staff and benefits — and quality.

As unions lost power under constant attack from big business — including the media — people began to believe all unions were corrupt and all their members greedy.

Only now, when private sector unions are all but gone, are working people beginning to see what has been done to them.

It may be too late to save public sector unions and build the private sector back up.

Or maybe arrogant people like Walker will awaken the working public in time to stop their progress.