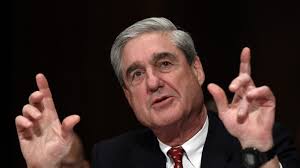 Robert Mueller is not a crook, he is not incompetent. He has been a Republican and a war hero. He’s someone the right should love, but Fox News has succeeded in making him into a villain. (Image from The Blaze)

Robert Mueller has some pretty damning stuff by all accounts. However, we don’t know what it is he has on the creature currently squatting in the White House and his cabal of crooks and liars.

I venture into Right Wing World occasionally when I see a post from one of my conservative friends that leaves me scratching my head.

“Oh, the witch hunt is over now!” or “This proves that traitor Mueller has nothing!”

I’ll just Google whatever their topic is and find the lie they’re crowing about. Sometimes I’ll comment with the truth, but mostly I just keep scrolling because you can’t argue with people who are operating from a base of Fox News lies. You can, however, post the truth on your own news feed.

My son is more in tune with the right-wing than I am because he was a Republican until the rise of this thug. And as much as my son hates him, he still hears most of what the right has to say, and he still believes some of it.

Stuff like: “It’s all based on the Steele Dossier and all of that is illegally obtained.”

Don’t ask me why they’re saying that, but I have it from a reliable source, even though I can’t watch Fox News myself.

The raid on the office of Michael Cohen wasn’t based on the Steele Dossier. It was based on decades of dirty dealing in the Southern District of New York, and if the creature fires Mueller now and seals all his records, there’s nothing he and his thugs can do about the evidence in New York.

And although the creature tweets almost daily that he’s not guilty of anything, he well might be. Even if no crime was committed, it is still illegal to try to impede an investigation.

We need to understand what the creature is doing here because fascists and petty dictators do this all the time. They discredit the media by claiming the most reliable and venerated members of the press are lying. Keep repeating that same lie over and over and over again and people will believe it.

Keep claiming an investigation of very real crimes is nothing more than a witch hunt and you may have enough people believing that the FBI and the officials in the Southern District of New York are corrupt and maybe you can prosecute them for”crimes” and maybe get away with your crimes.

The creature is a pathological liar. He has been caught in lies thousands of times since he took the oath of office. But Sean Hannitty, et al, keep defending him and their followers just trot merrily along behind.

They are dismantling our once great nation bit by bit. This administration is the culmination of a decades-long conspiracy by the oligarchs to take over control of the country and dismantle all our social programs so they can create a permanent underclass to serve them.

Look at what we have already: A minimum wage that’s just one-third of what it would have been if it had kept pace with inflation; a de-funding of the public education system that they don’t want or need, since they send their children to private schools that the rest of us can’t afford; cut after cut after cut to nutrition programs that feed low-income people; trade agreements that benefit them but send all our living-wage jobs overseas, where workers are paid even less than our minimum wage; privatization of the military and our prisons and the gutting of the one law that gave us some real improvements in access to health care.

To seal their power, they have attacked voting rights and now they’re stacking the courts to keep those unconstitutional laws on the books.

Robert Mueller is not a crook, he is not incompetent. He has been a Republican and a war hero. He’s someone the right should love. (Image from The Blaze)

The constant state of alert caused by the shitstorm in the White House is meant to distract us from what’s really happening.

And now the people who perpetrated the dismantling of the middle class are jumping ship. They’ve done the damage and it will take decades to rebuild — if we ever can.

So, what can we do? Support legitimate journalism. Do your homework when you see something you want to share on social media. Check for other sources of that information. Google it, check on Snopes.com or another reliable web site.

It’s bad enough that the right has people only believing Fox News and its approved sources; we don’t have to buy into that. I sent something to a conservative the other day and he claimed it was an unreliable liberal source because it came from the Washington Post. It was an op-ed piece by a Republican, but he wouldn’t believe it because it came from the Washington Post.

And above all, VOTE. Yes, the Democrats are controlled by Wall Street, but they are better than the right, and we can oust them, too, if they don’t start to undo some of this damage.

We can’t afford to perpetuate the ignorance coming from the right. We have to look for — and broadcast — the truth.

The truth is that we as a free nation are at great risk, and it may be too late already to save us.