We’re using Nazi tactics on immigrants. How is this OK? 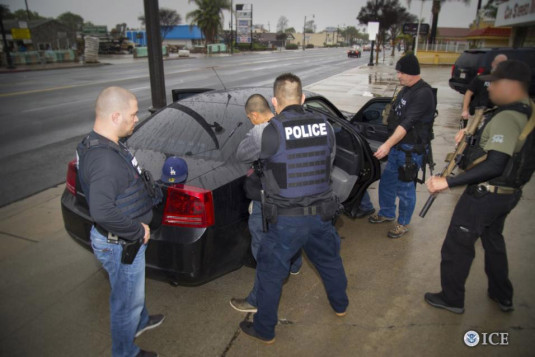 We have become the very thing we have claimed to hate the most: Nazis.

Across the country, immigration agents are arresting people, tearing them from their families and friends and dumping them into prisons, where they may languish for months or years — all because they tried to make a better life for themselves and their families, just as our ancestors did (unless, of course, you are descended from the people who were here when Europeans arrived and your ancestors were fortunate enough to survive the genocide).

My granddaughter is a third-grade teacher. One of her children came to school the day after the ICE raids in her city and cried as she told my granddaughter that her daddy was gone. People had come and taken him away and she didn’t know where he was or when she might see him again.

Another student said his uncle had been taken and he blamed himself because he left the door open when he left for school.

Six other students were missing from her classroom as their parents had taken them and fled in the night.

Here in Asheville, people are afraid to leave their homes so advocates have organized to get food to them and get their children to and from school.

Latin-owned businesses are feeling the pinch, so if you have business to do, please try to seek out and patronize these businesses.

In Upstate New York, a farmer was roughed up as he tried to come to the aid of one of his workers, who was being roughed up by armed ICE agents.

What have we become when we think this is OK?

Instead of rounding up Jews, we’re rounding up Mexicans and other Central and South Americans. Tell me how this is different. We are targeting an entire group of people and persecuting them.

Anyone with a Spanish accent or even a Spanish-sounding name is having to carry paperwork to prove they’re here “legally.”

I’ve heard people saying that they broke the law by coming into this country, but there is, in all practicality, no legal way to get here and escape the danger in their own countries. Once here, immigrants endure insults and abuse as employers pay them less than minimum wage and work them to exhaustion. They are beaten and raped and they’re afraid to report it because they fear they’ll be the ones arrested and sent to prison. They stay because they believe their children will have a better life here.

Risking their very lives to get here is as courageous as it gets in my book. My ancestors left starvation and grinding poverty in Ireland and didn’t find acceptance here, either. Wealthy Americans paid poor Irish to take their place on the front lines of the Civil War, and many went because they faced such discrimination in the workplace that this was their only choice.

But we weren’t rounded up, stolen from our homes and shipped off to overcrowded prisons for months or years.

They’re coming for our Latin brothers and sisters. They’re dragging them off in the night, kidnapping them from the streets and sending them to prison.

We can’t call ourselves people of faith — any faith — and abide this. We must stand up and protest. We must do all we can to make it stop. These are Nazi tactics, these are fascist tactics, the method of petty dictators and corrupt-to-the-core governments.

Who’s next? Muslims? They live peacefully among us now, but the hatred ginned up against them would make it pretty easy to drag them from their homes, jobs and schools.

Then who? Dissidents? That means me, an old, white great-grandmother. I could be next.

Then they’ll come for you. Don’t think they won’t.