We live in a war zone 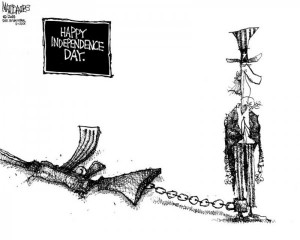 By my friend and former colleague, cartoonist Matt Davies.

Another 14 dead and 17 wounded, this time at a center for people with developmental disabilities.

No place is safe in America. No person is safe.

This isn’t true in other industrialized countries. That’s because they have laws restricting access to guns.

We don’t have that because we have the NRA, one of the most powerful lobbies anywhere, any time.

It doesn’t even matter when people with guns shoot innocent school children, we can’t pass any restrictions on people’s access to guns and ammo.

A few days ago, a pro-gun person suggested on Facebook that, according to Freud, I must be sexually repressed because I think we need common sense regulations on guns. I replied that Freud also said I was envious of his penis, which made Freud wrong on two counts.

I suppose that’s proof that some of us equate guns with penises, and penises are pretty important to some men’s view of themselves.

Here’s what I came up with, based on that list:

And this is why we can’t get anything through Congress, even though some 90 percent of Americans want sensible gun laws. Nothing matters more to Congress than money, and the NRA has a lot of it to spread around.

So, people who shouldn’t have guns have little trouble getting them. And the rhetoric stirred up by the right has people angrier and angrier — at Planned Parenthood, at Muslims, at anyone other than the NRA.

When an angry American shoots up a place, he (and nearly all of them are men) is called mentally ill, and we all shake our heads and say what a shame it is that people with mental illnesses can’t get proper treatment.

The problem is that angry people can get guns and ammo. And they can commit acts of terror.

As for mental illness, I have long been an advocate for adequate diagnosis and treatment. Yes, most of these shooters have a mental illness — no healthy person would take a gun and shoot strangers because he’s angry that they can get an abortion or for any other reason.

The problem is that these people can get guns. There are huge loopholes in the few regulations we do have, and we can’t get Congress to pass any more.

The Second Amendment has been twisted and perverted to fit the desires of gun manufacturers, and the rest of us have no protection from these organizations. We don’t need more “good guys with guns;” we need fewer bad guys with guns.

It’s time to tell the truth: The Second Amendment was never intended to allow unfettered access to guns and ammo, and the NRA is a terrorist organization.