We have the Congress the non-voters deserve 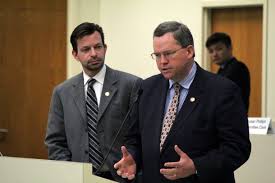 These two NC State Representatives got sent home on Election Day because people came out to vote. When people vote, change is possible.

To all of you who stayed home on Election Day because you felt your vote wouldn’t count, well, it damn well didn’t.

Did you see the damage voter apathy caused in North Carolina these last two years? Well, get ready for it on a national scale. The Democratic-controlled Senate won’t be there to fight the right-wing agenda.

There will be attacks on the Affordable Care Act, Medicare, federal nutrition programs, education, jobs programs, Social Security — everything people who don’t make a living wage need to stay alive.

Oh, and we won’t see any increases in the minimum wage, either.

So, how did this happen?

First of all, only about one-third of eligible voters came out on Election Day. Someone who’s good at math told me the Senate changed hands with only 19 percent of the popular vote.

So, now we have the crazy legislative branch of a corrupt third-world country, and they own the judiciary.

So, why did the Democrats lose?

Well, how many did you hear stand up and say they were proud to have helped expand access to health care? How many told stories of the people whose lives are being saved every day because of the Affordable Care Act?

Most of the Dems ran away from President Obama, who has accomplished so much despite having both hands tied behind his back by an obstructionist Congress.

No one stood up and said they were proud to stand with the president who rescued a collapsed economy, saved the auto industry, ended two wars, presided over the longest period of uninterrupted job growth in history, halved the national deficit, expanded access to health care for millions of Americans, saving tens of thousands of lives a year in the process.

Instead we let the mainstream (corporate) media write the narrative, and our candidates ran away from an “unpopular” president.

We need to stop being ashamed of what we want for America and its people. We should stand proudly with this president, and let me point out that those candidates who did that won elections.

For those candidates who shied away from progressive values, let me just say you helped elect people who believe in evolution and deny science on every level. You helped elect people who see pregnancy resulting from rape as a blessing. We have elected officials in Washington who believe climate change is a hoax and who think fracking is good for the economy and the planet.

We have lawmakers who think only sluts want to use contraception.

Here in North Carolina, we sent a man to the US Senate who had just a 9 percent approval rating in his previous job.

This can NOT end well.

Let me end by saying we here in Buncombe County, NC, showed the country how to get it done this election.

Two of our three representatives in the state House of Representatives were right-wing politicians who voted not to expand Medicaid and to fast-track fracking, among other damaging laws. They both had big money behind them, and one was slated to become Speaker of the House.

But two local men, Brian Turner and John Ager, decided to oppose them. Neither took corporate money, both went door-to-door, held marathon phone banks, activated the grass roots. John Ager’s campaign made 2,000 phone calls on Election Day to remind people to get out and vote. We told the truth while big money lied, and the voters came out in force.

We turned out the vote for these two men and they won. They beat the big-money candidates by letting people know their votes could make a difference.