Trump’s words are those of a sexual predator 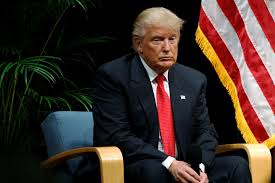 The man is a sexual predator.

Let me start by saying Donald Trump has always been creepy to me. There’s something icky about the man.

So, yesterday’s revelation that he bragged about sexually assaulting women comes as no surprise.

See, he has objectified women all along.

He wants sex with beautiful women, but he has no respect for them, and I would venture a guess that he has no capability to love a woman anywhere near as much as he loves himself.

He has said he would love to “date” his daughter. No decent man says that.

My son thinks all three of his daughters are beautiful, but he would never phrase it in sexual terms. My sisters and I used to joke that our father never looked at us from the neck down after we reached puberty.

But Trump fantasizes about “dating” his daughter.

As a survivor of childhood sexual abuse, I don’t have any sense of humor about sexual abuse or assault. Sexual predation is never funny. When men exercise their physical power over women by grabbing, kissing or otherwise assaulting them, it is not funny, and it is not excusable.

What Trump talked about was sexual assault, which is a trigger for me and many other women who have been victimized by men like Trump. It can bring on nightmares or panic attacks, or just feelings of anxiety and depression.

Fifty years after my abuser stopped assaulting me, I would have loved for sexual assault to be nothing to brag about, but people are still defending Trump.

In the fundamentalist Christian tradition of my youth, women were always to blame for abuse or assault. We were the daughters of Eve, who committed the original sin, and we were as guilty as she was. If we were assaulted, it was our own fault.

I must have had a hell of a come-hither look when I was 3 and the abuse started.

I know women in the fundamentalist Christian tradition who were raped by clergy and then forced to pray for forgiveness for tempting them.

When our mere existence is an excuse for sexual assault, something is wrong. Very, very wrong.

A man who brags about wanting to date his daughter, who says he needs a breath mint because he might see a woman he just has to kiss without her permission, who says he can grab “pussy” because he’s a celebrity — that man deserves nothing from the rest of us but to be completely ostracized.

When people defend Trump by saying Bill Clinton got a blow job in the Oval Office, I have to remind them that as icky as that is, it was consensual.

My husband says he has never heard his male friends talk this way about women, not even in locker rooms. It is deeply offensive to him (that’s one reason I love him).

I don’t care how much you hate the Hillary Clinton, she is nowhere near as reprehensible as this creature. It’s not even close.

So, if you want to defend Trump, do it out of earshot of me because I will call you out for your misogyny.

There is no defense.