This has nothing to do with saving babies’ lives 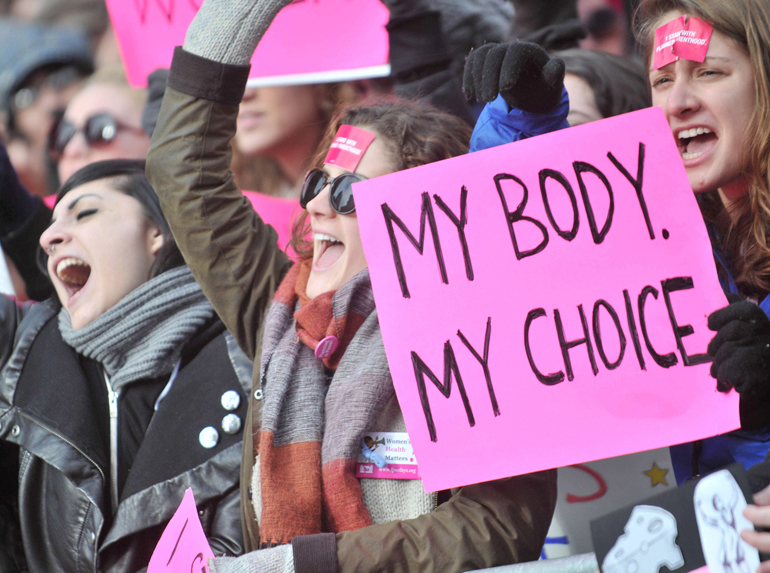 The attempt to criminalize abortions, even in cases of rape or incest, is about enslaving women.

It’s about taking control of our lives away from us.

It’s about keeping us in poverty and forcing our children to fight the endless wars of the uber-wealthy.

The policies of the people who call themselves “pro-life” are as anti-life as it gets.

The irony of their position is that they’re thrilled when I decide to continue with a pregnancy that could result in a child with serious birth defects, but once that child is here, they refuse to treat his medical condition, refuse to insure him, turn him away when he’s sick and refuse to even see him until they can make a profit from his chemotherapy. But before they’ll allow him access to treatment, he has to leave his wife because she has a newer model car and some tuition money in the bank. When he applies for disability because he’s now too sick to work, we make him wait 37 months and he’s  dead nine days before his first check comes.

Sure, you’ll stop me in the parking lot of Planned Parenthood and scream insults at me, no matter the reason for my visit there, and accuse me of murder, and in the next breath trash the life of my son because he’s somehow not deserving of that life.

If you think it’s a life worth saving before birth but you don’t care about it after it’s born, you are the worst kind of hypocrite.

You want to insist I bear a child whose life ends with three years of unspeakable suffering because your “pro-life” policies care nothing for him or his plight? That’s not going to happen. I’m going to fight for women’s right to control our own bodies, plan our own families, make our own choices.

Now I get men telling me how precious that life is while it’s still in the womb, as though it were their lives at stake during pregnancy and delivery, as though they’re going to help raise it, pay me a decent wage so I can feed, clothe and shelter it, make sure it gets a decent education, stays safe from harm …

They want to be able to walk away if a woman gets pregnant because it’s her fault, as though their sperm had nothing to do with the pregnancy.

Or, they want to be able to rape me and then take over my life because the child deserves a father in its life, even if that father is a violent criminal. They want to force me to share parenting with a person who already has demonstrated that he’s not fit to raise a child.

They want my 11-year-old daughter to bear the child of a rapist and then have him in her life forever.

And then they romanticize it by finding a woman who had her rapist’s child and loves that baby. Awwww. Aren’t the rest of us craven murderers if we disagree?

Well, I loved my son. I tried everything I knew to get him the care he needed, but since he was born already, nobody cared.

Where were you “pro-life” people then? Where was your loving concern as my precious son lay dying? Where is your advocacy for the 45,000 people who die the same way every damn year? We’re closing on a half million deaths from lack of access to health care in the 11 years since my son died. Why do I hear nothing but crickets from you on this pro-life issue?

I’ll tell you why: You don’t care about human life, you only care about control of women’s bodies, that’s why.

And if this isn’t about controlling women, why are these same people attacking access to contraception?

The “Christian” patriarchy wants us to believe sex is a sin for women, but not for men. We women are seductresses and nothing more, they think. They have to control us because we can’t control our urges and we cause them to lose control of their own.

I know this to be true because I was raised among these people. I was taught very deliberately that I was less than a man, that my abuse at the hands of my grandfather — which began when I was just 3 — was my own fault, that I somehow seduced that poor man. They are hate-filled and despicable.

If you want me to believe you’re pro-life, then show up on the front lines of the fight for health care, a living wage, voting rights, mitigating climate change … Get arrested with me while trying to talk to a legislator about the importance of people’s lives after they’ve exited the birth canal.

Otherwise, perhaps you should just admit that you are not pro-life, you’re simply pro-fetus and pro-control of women.

But remember this: Women will rise up. We will not go back to enslavement or forced childbirth. We will learn ways to induce our own abortions, just as we always have.

Some of us will die because of your backward, amoral policies, just as we always have. But you’ve proven already that our lives mean nothing to you, so I don’t expect you to care about that.