They’re not done trying to steal our health care 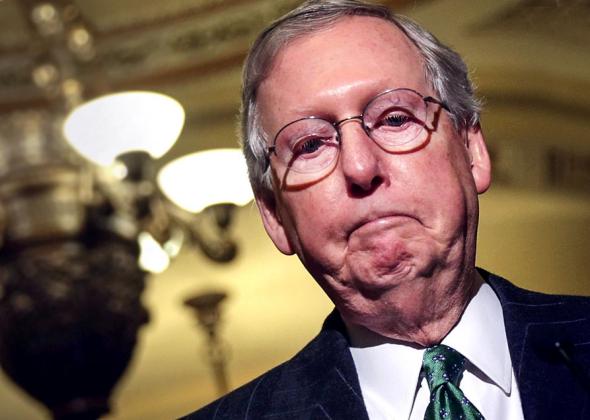 Do you really think this man and his partners in crime are going to give up and stop trying to take away our access to health care?

Everyone seems in a celebratory mood this morning.

Mitch McConnell announced the latest version of Trumpcare is dead, and that saves Medicaid — for now.

But he also announced he will try a “clean repeal,” meaning the ACA would go away in two years. It would leave up to 33 million people without insurance. Thirty-three million. That’s how many people have gained insurance under the Affordable Care Act.

When my son died on April 1, 2008, I started fighting for reform. In 2009, I left my job as a newspaper reporter — I volunteered to be laid off — so I could devote all my time to the effort.

I wasn’t thrilled with the Affordable Care Act, but it was a step in the right direction. It would have forced insurance companies to cover my son and he likely would still be alive — that is, if it had passed in 2005 instead of 2010.

As it is, my friend, Kelly, who worked with me in the fight to pass the ACA, will die if this is repealed. Kelly has lived with cancer for years, and if the ACA goes away, she will lose her insurance and her access to the care she needs. She will die.

Middle-aged people with diabetes, asthma, high blood pressure, high cholesterol, depression and any number of other illnesses, will be left to die. Cancers that are treatable when diagnosed early will be diagnosed too late to save people’s lives — exactly what happened to my son.

Think about it: if you make $35,000 a year and you have a policy with a $10,000 deductible and high co-pays, you won’t be able to afford care unless you sell your house — if you own a house and can sell it in time to save your life. That’s what the Senate version of “replace” had in it, a two-tiered insurance system that would give people with a lot of money good insurance while the rest of us would be able to get only junk plans.

Before the ACA, some 45,000 Americans died every year from lack of access to care. That’s one every 12 minutes.

Under the ACA, an estimated 33 million more Americans are covered than were before. Most of the 12 to 15 million without coverage now are low-income people in states that have so far refused to expand Medicaid. That’s also where most of the approximately 20,000 who die every year from lack of coverage live.

So, we’re saving 25,000 lives every year with the ACA, but the powers in Washington want it repealed because — well, why?

The ACA is not failing. Insurance companies are not going broke. In fact, a federal court has found that United Health Care was not losing the money it claimed it was losing when it pulled out of the ACA marketplaces.

What’s happening is that a group of ultra-wealthy, ultra-conservative thugs want more money. They want more tax breaks for the rich. They want less regulation. And they don’t give a damn about you and me. They don’t care about the opioid addiction epidemic — in fact, they deliberately caused it to make money.

If you don’t remember, Purdue Pharmaceuticals began marketing synthetic opiates in about 1996. They told doctors and others that this new synthetic wasn’t addictive, although they knew damn well it is. Before long, doctors were prescribing it for things as simple as a tooth extraction — things where an over-the-counter painkiller would do.

They now ship enough painkillers into West Virginia alone to kill everyone in the state.

And you think these murderers are going to give up now because they can’t get a “replacement” through for the ACA?

Their disdain for us runs so deep that they won’t give up. Tax cuts are far more important to them than our lives. They want that money.

They’re talking about passing a repeal that would take effect in two years — after the next election so we we can be distracted easily, since we’ll still have our insurance at election time. They can keep promising a replacement that they have no intention of passing.

Please remember that they’ve had seven years to come up with a replacement and they showed us already that they have nothing.

Obama offered a huge olive branch with the ACA, and he put icing on the cake by taking single-payer off the table at the outset. Had we started discussions there, we might have been able to get a public option and give insurance companies some competition.

But we started negotiations in the center and landed right of center, and they still want to get rid of it.

That alone should tell you that they will stop at nothing to take away our health care. If it is at all possible, they will do it. And they won’t stop trying.

Don’t let up now. Don’t stop calling, writing, e-mailing, faxing … Our lives depend on it.