The false equivalency of Roy Moore and Al Franken 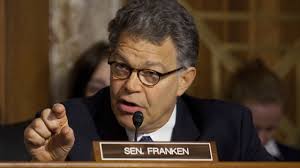 Sen. Al Franken has a background as a comedian, so, yes, we will find inappropriate stuff there.

Al Franken did a stupid thing. He posed for a photo where he pretended he was about to grope a sleeping woman’s breasts.

The woman who took the photo said it was staged. Franken apologized and called for an investigation of the incident.

The woman in the photo claimed he kissed her, without her permission. If this is true, it is an assault. But given the conflicting testimony, and the fact that no one else has come forward with the same kind of story, I want to see the results of an investigation before I join the Franken-should-resign chorus. If he did, indeed, assault this woman, he needs to go. If he did not, his call for an investigation, his apology and her acceptance of it, are OK with me.

I say this as a survivor of assault that began when I was 3 and continued throughout my childhood.

I say this as a survivor of assault as an adult.

I say this as a woman who has been groped and harassed in the workplace.

I say this as a reasonable human being.

Moore, on the other hand, “dated” a number of teenage girls while in his 30s, and according to the testimony of not one, but five, women, he attempted to get physical with them.

Moore’s brand of religion is no different than that of fundamentalist Islam or Judaism. It denigrates women. It considers us the daughters of Eve and guilty of her Original Sin, which is seduction.

In this world view, women are evil and must be controlled by men. We can not make our own decisions, we can not be left to our own devices. We are not equal in any way, and we can be owned in much the same way as a dog. The only difference is that we are trained to please men sexually and we are good for nothing more than bearing their children and cleaning up their messes.

In this world view, we have no rights of our own, and we can be married off as soon as we start menstruating so that our husbands can train us to be good servants to them.

Moore is not a pedophile by definition — pedophiles are attracted to pre-pubescent children and Moore “dated” adolescents.

He believes he did nothing wrong, and according to his religious beliefs, he is correct.

But according to social mores, according to the rest us, who do not subscribe to his backward religious views, he is a menace.

Like Mike Pence, he would love to legislate his views, views that would take legal rights away from women and people of color. Remember, this is a man who has complained in public about “new rights” given to black people in the 1960s.

In Moore’s view, women are always at fault when they are assaulted because their mere existence tempts men.

And don’t tell me I don’t understand his religion — I was raised in it. My parents never subscribed to it, but I went with friends to a church that believed all this drecht, and I suffered for it. I was part of that church, although I was able to walk away when I was 18 and saw just how harmful its theology was. Many of my friends were trapped in it by parents who bought these beliefs. They were forced to choose between their families and sanity.

So, yes, I can defend Al Franken while I call out Roy Moore. And I don’t think I’m rationalizing or being hypocritical.

To say their offenses are equal is just plain false. Moore is driven by a self-righteous, wrong-headed world view in which women are there to please him, care for his needs and bear his children, and he wants to force the rest of us to live by that world view. That is not the same thing as a bad joke, which is what the complaint against AL Franken seems to be.

I’m trying to look at the whole person here, and I can’t see any equivalency between a religious zealot and someone who got into politics to try to fight the takeover of Congress by people like this zealot.

As for the current occupant of the White House, he is a confessed sexual predator who only complains about sexual predation if it comes from someone who doesn’t support him. He is fine with a man who wanted to marry a teenage girl and train her to be a good wife, much the way others would train a circus animal, but he thinks Al Franken is a pig.

I’ve taken some time to think about this, and unless there are more complaints from women who have been victimized by Franken and until there is the investigation that Franken himself called for, I’m not going to join the call for him to resign.

Unlike Moore, Franken has a long history of defending women’s rights and the rights of people of color. Yes, what he did was stupid and in poor taste. But if that were the bar, the Mango Menace should have been gone before his political career ever started.