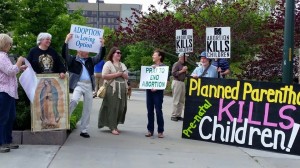 I went to a rally last night in support of women’s health, reproductive and otherwise.

Let’s just remember first of all, that abortion is legal, and it needs to remain so.

When I was advised to have an abortion, I chose not to, with the operative word here being chose. But then his heart was stopped by a system that refused to give him the medical care he needed. When we fix that, we can start to talk about abortion.

Of course, as soon as the anti-abortion folks heard about the demonstration, they showed up with their signs and intimidation tactics (they stood nearby, taking photos of us, I guess for their web sites). We responded by taking photos of them.

I decided to engage. I asked whether they supported the right of every human being to have access to health care. At first they didn’t want to talk because a television reporter was interviewing one of them.

I repeated my question.

“Well, that’s a matter of opinion,” one of them said.

“But it’s about babies’ lives,” another man said.

“My son was a baby once,” I said. “He died at 33 because he couldn’t get care. He did nothing wrong. What about his life? What about the lives of the five to seven people who die in North Carolina every day because we won’t expand Medicaid?”

“It’s about the babies,” the man said.

Mothers’ lives don’t matter. The already-born can drop dead for all they care.

“Then stop calling yourself pro-life,” I said. “Life continues after birth, and if you don’t support it, you’re not pro-life.”

These anti-lifers want nothing more than to force women to pump out babies. Many of them are also against contraception and support allowing a boss to fire an employee for using it. Some of them want to force women to carry non-viable fetuses to term; some also want to criminalize miscarriage.They say rape is wrong, but many support a rapist’s parental rights after they have forced a woman to have his child, keeping him — and the trauma of the crime he committed — in her life forever.

These are not reasonable people, but their out-of-the-mainstream views are becoming law in states across the country.

Many media people are trying to make them sound reasonable. In fact, last night the media paid more attention to them than to the demonstration.

When women’s clinics close, they’re labeled “abortion clinics,” even when abortion is only about 10 percent of what they do. I write a letter to the editor every time I see that, but the letters are’t always published, and I’m sure they’re not read in numbers as great as the original story.

Planned Parenthood was my health care provider for several years when I didn’t have health insurance. I don’t know what I would have done without that clinic. I had to walk through some screaming meanies to get to my checkups and cancer screenings because the media perpetuate the myth that everyone walking into a women’s health clinic is there for an abortion. Planned Parenthood helped me avoid an unwanted pregnancy.

I know some who oppose abortion also support helping poor families cope, feeding children, paying their parents a living wage, are anti-war and against the death penalty. Those people are in the minority of a movement that wants to subjugate women more than it wants to protect babies.

Unless you are willing to support life after it emerges from the birth canal, you are not pro-life and I will call you out.

It’s part of my mission to educate people.