Telling the story, over and over 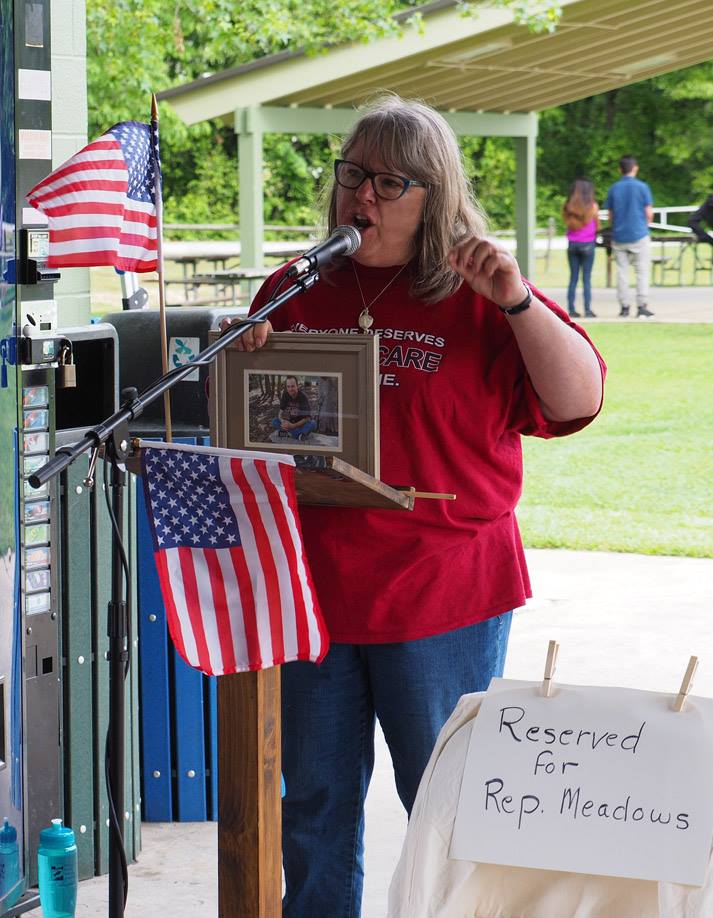 Speaking at a town hall to which my congressman was invited, but chose not to attend.

Three times on Friday and Saturday, I told the story of the death of my son.

It never gets easier. It’s emotionally exhausting, yet I work to find places to speak and people willing to listen because his is the face of the injustice inherent in our so-called health care system.

I stood alone outside the federal office building in Asheville Friday at noon as people at the stoplight honked their approval (this was the first time I’ve done this that no one flipped me off or said rude things). Then I packed up and went to a “listening” session sponsored by the NC Department of Health and Human Services, which is trying to put the best face possible on the legislature’s planned dismantling of Medicaid here in North Carolina.

The right-wing agenda of the legislature has been the shredding of our social safety net ever since they took power in 2010. They have refused to even consider expanding Medicaid and have chosen instead to privatize it, to farm it out to their corporate friends, who will line their pockets with some of the limited funds meant to help people in need.

I listened to another woman talk about trying to recover from a horrible accident while having no access to care because, even though she has obvious disabilities related to the accident, she has been denied both Medicaid and disability. I heard her vow, tearfully, to continue her fight.

Like these two women, my son was not lazy, nor was he to blame in any way for his condition. He didn’t choose to have a birth defect that left him vulnerable to colon cancer. He didn’t choose not to buy insurance — that was decided for him by greedy corporate hacks who saw no profit in him. In fact, no one saw a profit in him until he had stage 3 colon cancer and needed chemotherapy. That’s when he became eligible for Medicaid (but only after he left his wife), and the drug companies collected more than a half million dollars while my son waited for approval for disability. He would not live to see a penny of it — his approval took 37 months and he was dead nine days when his first check arrived.

When I returned to work after the death of my son, I found an e-mail telling me about the deaths of three young men who died within weeks after being released from state psychiatric hospitals without follow-up plans. One of them was released and dropped off at a homeless shelter that had been closed for months. He landed in a fleabag motel, where, in utter despair, he took his own life.

No policymakers cared until the day the story ran. Then they announced a policy change: No one would be released from a state psychiatric hospital without a follow-up appointment with a psychiatrist and enough medication to carry them over to that appointment.

Stories are powerful. Stories matter. That’s why I continue to tell my son’s story.

I told his story again on Saturday, at a Town Hall to which Mark Meadows, our member of Congress, was invited, but to which he didn’t come.

I talked about Mike’s experience not getting what he needed, even from the emergency room. I explained that the ER only has to stabilize patients, not look for or address the root cause.

Two women came up to me after I spoke and told me I was wrong. I explained again how the ER only has to stabilize patients and they insisted what my son got was treatment.

“No, he didn’t,” I said. “He left the ER with the wrong diagnosis, the wrong medications and a big bill three times. What he needed was a diagnosis of the malignant tumor that was blocking his colon.”

“I’ve studied this,” one of them said to me.

“I’ve read the laws and written about it for three decades,” I told her. “You are wrong.”

She tried again to tell me I was wrong, and I just turned and walked away. Some people refuse to hear the truth and I can’t waste my time trying to get through to them.

After that, as I stood fuming about how ignorant people can be, a woman walked up to me and said, “You’re probably going to think I’m crazy, but I have a message from your son. He’s really, really proud of you. He stands behind you as you speak, and he’s smiling.”

I decided to not think she’s crazy. I need to feel his presence whenever I can. I need for him to not be completely gone from me.

So, I tell his story. In his memory, I work for access to health care for every human being, and I won’t stop until we’re done.

Where are the cameras at this year’s town meetings?

April 25, 2011 a world of progress Comments Off on Where are the cameras at this year’s town meetings?

Two years ago, the Koch Brothers and their big business allies paid a bundle to get Tea Party members out to congressional town hall meetings to shout down any resasonable discusson on health reform. The media were all over it, running footage of the confrontations and the weeping I-want-my-country-back women.

This year, Progressives are coming out in force to confront Republican members of Congress about budget cuts, Medicare “reform” and the attempts to repeal, defund or otherwise cripple reform, but you won’t see a whole lot of coverage. Maybe part of the reason is that Progressives seem to be less violent and screechy in their confrontations.

Progressives also tend to have real questions to ask, like those posed to GOP Rep. Jim Renacci from Ohio.

According to a report by Daily Kos, a questioner asked why Republicans don’t come up with an alternative plan before they repeal the current law.

Renacci replied with a non-answer: “Remember, it was the American people what sent us down there…”

I have a feeling the American people what sent them down there weren’t counting on such deep cuts to the social safety net alongside deep tax cuts for the wealthiest.

I don’t recall seeing anything about the confrontation in the “mainstream” media that was so happy to cover the Tea Party.

However, you will see conservatives claiming these people are being organized by unions and other “liberal” groups as they claim the opposition to health reform two years ago was spontaneous.

Our local paper here in Asheville wrote a story about one of the traveling groups, and the reporter failed to ask who paid for the bus and why people who obviously were on Medicare were holding placards that said, “Keep your government hands off my health care!” The reporter didn’t ask where the bus riders came from or where they were going. The reporter never spoke to anyone with an opposing point of view, and whoever edited the story didn’t see anything wrong with this one-sided piece with no real questions asked.

That’s par for the course in this country now. Our “free” press is free to cover the right, and free to ignore the middle and the left.