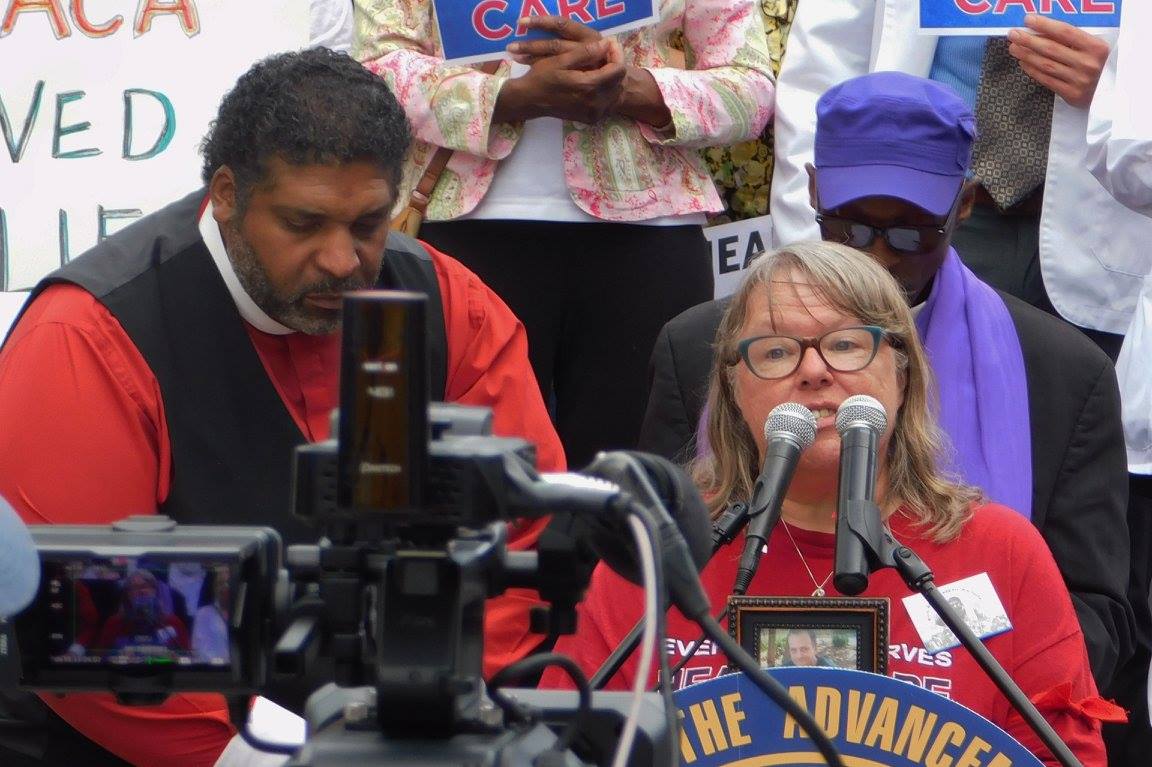 I spoke at the press conference an hour or so after being released from jail, with Rev. Barber standing nearby. I am so proud to be a part of this movement. Arrest me all you want, I refuse to stop trying to talk to legislators about health care as a basic human right.

On Tuesday morning, I got my butt hauled off to jail for the third time in four years.

I wanted to talk to Senate leader Phil Berger, as is my right under the North Carolina Constitution, but when I got to his office, a very large man was standing in the doorway, blocking my entrance.

“No it’s not,” I said. “This is a public building and the person whose office this is, is a public official. I have a Constitutional right to speak to him.”

He continued to block the entrance and several of us began to chant, “Health care NOW!”

At this point another man came to stand by the first one.

“You need to be quiet,” he said. “People are trying to work.”

I stared at him or a short moment.

“HEALTH CARE NOW!” I said, looking him straight in the eye, and those behind me joined in the chant.

I don’t like to be shushed in any case, but I get particularly testy when lives are at stake, and they most certainly are here. Some five people are dying every single say because Sen. Berger and his cronies are denying the Medicaid expansion provided for under the Affordable Care Act. This denial leaves a half million people in our state without access to care, and as I said, about five of them die every day, just the way my son did.

I’m not going into the General Assembly Building for entertainment or any frivolous purpose; I’m going in there to try and speak to my legislators about how desperately this Medicaid expansion is needed.

These people call them selves “pro-life” and “Christian,” yet their actions show a callous disregard for human life.

Rev. Barber stood with us as most of us sat down on the floor to wait for Sen. Berger to come back to his office.

We were told we were blocking the doorway, but we were not the ones doing that. We would have gone in and sat quietly and waited, but the door was blocked by his thugs, not by us.

We were told we were making too much noise, but I explained that people’s lives are more important than the ability of Berger’s secretary to hear who was on the other end of the phone line, and that if they would let us in, we would sit quietly an wait.

So, we started singing to pass the time.

Chief Martin Brock came by with a megaphone and warned us we had to leave, but we were there to address legislative leaders, as is our right under the NC Constitution, and we intended to do just that.

So, we were arrested, 32 of us, for second-degree trespass in a public building while it was open to the public. This is my third arrest for this same thing. The first one was thrown out on appeal. They never even bothered to prosecute me for the second arrest and there’s a petition to dismiss the charges because I never got a court date.

They say the definition of insanity is doing the same thing again and again, hoping for different results. Perhaps I am insane for trying again and again to make these lawmakers see that their actions are killing the very people they have sworn to serve. But I will not give up.

We spent an hour or so in a committee meeting room in the legislature building, singing freedom songs and hymns, before we were herded into vans and taken to the Wake County Detention Center, where we were processed and placed in holding cells.

I don’t know about the men, but we women started singing again. An officer told us we had to quiet down, so we sang a little more quietly. We had a contest to see who could stand on one foot the longest. We comforted a very frightened young woman who had been arrested for driving without a license, and we laughed.

We had been without food all day by the time we were released at about 4:30, so we were grateful to find snacks and water, brought by the Movement support team.

And we made it back downtown in time for the 6 p.m. press conference.

I love my Moral Monday Movement family, from our convener, Rev. William Barber, to all the people who stand with him in solidarity, no matter what our issues.

I’ll be honest: I believe this movement and the people in it have saved my life. There have been days I didn’t want to go on without my son, but these good people have held me up. I feel reborn every time I am with them. When I lose hope, someone always reaches out to support me and tell me we will triumph.

Progress is slow. Movements take time. I’m in this until we finish the work or until I’m carried out feet-first.

Why I go to Raleigh for Moral Mondays

June 14, 2013 a world of progress, letters, progressive living No comments 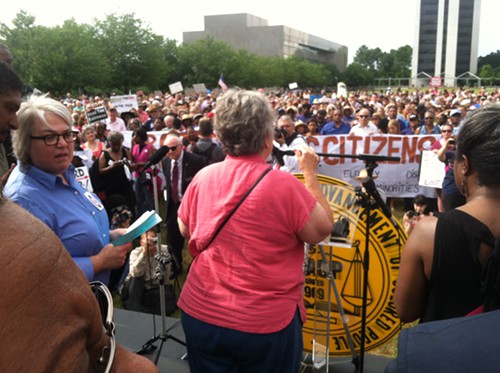 This is from two weeks ago, when we had about 2,000 people. We had about the same size crowd last Monday when there was a tornado watch. We are dedicated to making change.

I think it’s important to talk about Moral Mondays here,  to explain why I got involved, why I got arrested on May 13, and why I continue to go for the rallies.

First of all, let me say in response to those who say we can’t accomplish anything with these demonstrations, I wouldn’t have gone if I didn’t think we could make a difference, and I am willing to tolerate the vitriol of people who would discourage us because I think they are afraid of us and what we stand for.

I go because I feel a moral obligation to protest the General Assembly’s and the governor’s refusal to expand Medicaid under the Affordable Care Act. Their ideological decision puts a half-million lives at risk in this state, and estimates are that at least 2,000 will die prematurely because of this decision,

Those lives matter to me. Each one of them matters. I don’t care if it is a homeless person who is addicted to drugs and alcohol. I believe each life has worth. If you don’t believe the same, please don’t call yourself pro-life in front of me.

My primary passion is health care, but when we take away unemployment compensation from more than 70,000 people, it has consequences. Most of them also lack access to health care because you can’t pay for COBRA if you don’t have any income, and most adults aren’t eligible for Medicaid here in NC.

When we de-fund schools, we rob children of the chance to rise out of poverty and provide for themselves and their families. They also will be the ones most likely to not have access to health care later on.

These issues are deeply connected to each other. Living wage impacts poverty, and all the stresses that come with it. People who have enough to live on are healthier overall because they don’t have the stresses associated with poverty.

I have visited my legislators repeatedly to educate them on the importance of access to health care and about the lower costs associated with access to care. My representative voted against Medicaid expansion. He voted to cut unemployment benefits. He supports a voter ID law that is a thinly disguised poll tax.

I am frustrated beyond words. I cannot fathom the reasoning behind barring access to health care for 500,000 people.

Our state’s computer system is their first excuse. It isn’t up to the task, they say. But then they decline to mention that we turned down federal money to upgrade the system.

When I reminded them of that, they said we have to fix Medicaid first. Well, North Carolina’s Medicaid system was a national model until its funding was slashed two years ago. Restore the funding and the system will be a model again. Instead, though, they are going to try and privatize it the way they did with the mental health system a decade ago. That “reform,” you may recall, was an unmitigated disaster.

When I explain that, they usually have a meeting they have to rush off to.

They aren’t listening, and it frustrates those of us who oppose what they’re doing. My heart breaks for people who will die because of these misguided decisions; it breaks for the families of those casualties.

Unless you have held the hand of a loved one as he or she dies unnecessarily, you can’t know the pain.

As a person of faith, I take seriously the Bible’s instruction to care for “the least of these.” And it is not just Christianity that requires this of people; it is a basic tenet of every major religion, and it is important to just about every atheist I know.

That’s why nearly 400 people have gone into the Legislature Building and been arrested. Dozens of them are clergy. Some are teachers and professors, students, old, young, black, white, Asian, hippies and lawyers.  This is a diverse crowd, and its members are passionate about justice for all North Carolinians, not just the wealthiest.

As the ones being arrested go into the building, they are cheered by a crowd of thousands. Hundreds of people move to the side of the building to await the departure of prison buses filled with people who are not afraid to speak truth to power.

When I was arrested, those cheering voices assured me I was doing the right thing. They gave me courage and hope.

I do not go to Moral Mondays for political reasons; I go for moral reasons. I go because if I do nothing, I am as much to blame as those taking the immoral actions.

I go because every life has worth.