This person is not — and never will be — my president 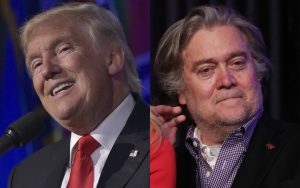 Neither of these men belongs in the White House.

This has been really hard for me. I have friends and family members who voted for this person. They begged me to give him a chance because they hated Obama as much as I hate this person.

I’m sorry, but Obama doesn’t trigger crippling anxiety in you because he is a sexual predator and you are a survivor.

Obama never threatened to take away your right to control your own body.

Obama symbolized an acceptance of diversity. He is well read and intelligent. Even when attacked mercilessly and blocked at every turn, he never lashed out. This person is awake at 3 in the morning lashing out on Twitter because of a verbal insult issued years ago.

He is a dangerous man on every level, mentally ill and willfully ignorant. He is hate-filled and his entire campaign was fueled by hate — by racism, xenophobia, misogyny, Islamophobia, homophobia — and I don’t expect the next four years to be anything different.

The first thing he did was to choose a stalwart of the “alt-right” as his closest advisor. The alt-right is nothing more than a polite name for neo-Nazi. Look it up. They stand for hatred of people of color, of anyone not white, male and Christian. Many of them have had their Twitter accounts canceled for tweeting hate.

I don’t have to give him any more chance than I would give the man who molested me as a child or the man who abused me as an adult. His behavior makes it abundantly clear who he is and what he will do.

Already, there’s talk of a Muslim registry. Know that I will register as a Muslim on Day One, as will millions of others who hope to protect our Muslim brothers and sisters.

Already, he has appointed people who want to strip me of my rights to control my own body.

Already, Paul Ryan is talking about stripping senior citizens of their Medicaid and Social Security, and gutting Medicaid, which is the only access poor people have to care.

Already, there is talk about getting rid of minimum wage, which is too little to live on as it is.

Already, there is talk about deporting millions of people who are working hard and trying to do better for their families.

Already, there is talk of annulling the marriages of my LGBTQ friends and neighbors.

Already, there has been a marked increase in hate crimes. A friend of mine was threatened as she was leaving synagogue with her grandson. The threats came from white men in a truck plastered with stickers supporting this man and sporting two large Confederate flags.

Gay friends have had people tell them their marriages — and the more than 1,000 rights and privileges that go with them — will end as soon as this man takes office and begins stacking the Supreme Court.

You might have noticed that I have not uttered this man’s name. I will not give him that much respect. He is not my president. When President Obama leaves office, I will have no president.

I am prepared to fight for my rights and for the rights of everyone this man considers “other.” I will not be a dutiful American as millions of Germans were in the 1930s. I will be a dutiful human being and fight against hate.

And if you want to spew hate against me or anyone else on my Facebook thread or in comments here, I will block you. I will not tolerate hate in any form, from any person. I am fine with disagreement, but I will block hate every single time.

Stand against hate, fight against tyranny 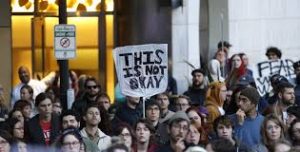 I will protest. I will put my body on the line, but I will not be violent. Let us take to the streets in PEACEFUL protest.

This week, the daughter of an African-American woman told her mother that she, her Latino husband and their children would be moving out of the country following Tuesday’s election of a man who has promised to show nothing but contempt for them.

Another woman’s biracial grandson was called the N-word on the school bus.

A lesbian friend was called a reprehensible name and told her marriage would be annulled.

A Muslim friend is afraid to go grocery shopping.

These examples are just among my friends.

This is the new America.

On Facebook, a high school friend complained that Democrats are bad sports because a white man reportedly was beaten up by black men because he voted for the man whose name I refuse to utter.

I reminded that friend of the verified news reports of gays, Muslims and people of color being beaten up as their assailants named this man who might move into the White House.

The hatred is palpable.

That does not mean I won’t fight.

Last night, I listened to Rev. William Barber on a conference call with hundreds of other people, as he told us he believes we do not have to be gracious about the political victory of a man who has promised to be cruel to immigrants, Muslims, LGBTQ people and more.

We do not have to offer congratulations to a man who has shown no compassion, no honor and no regrets for the violence of his followers.

This morning, I spoke with my friend, Rev. Rodney Sadler, who echoed Rev. Barber’s sentiments.  Rev. Sadler and I talked about the protests we plan to organize and/or attend, and about our fears for the safety of people we love.

Sitting at home is the same as doing nothing. Silence in the face of tyranny makes one complicit. As this man tries to implement his hate-driven policies, we who enjoy privilege must stand against all of it.

I will stand with my brothers and sisters whose lives and bodies are under threat. You will have to go through me to get to them. I will do everything in my power to protect them, except violence. I will not stoop to that.

I am a follower of Christ, who instructed us to love our enemies, to care for “the least of these” among us. I will feed the hungry and love the marginalized. I will defend the defenseless and give voice to the voiceless.

To me, loving my enemy does not mean being gracious toward someone who would let children go to bed hungry, who would deport millions, who would strip women and LGBTQ people of their legal rights, who tweets vile insults to people who disagree with him.

Loving my enemy means not harming them in any physical way and believing that they are deserving of redemption if they seek it.

Loving this person him does NOT mean any form of approval for his policies or beliefs.

I will stand against this person as I stand for peace and justice for everyone. I will not sit down.

I will take to the streets with my brothers and sisters. I will do no violence. This is my promise.