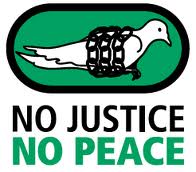 No justice, no peace.

The first time I heard those words, I was disturbed.

Was it a call for armed revolution? Was it an invitation to overthrow the current order?

As it turns out, it is neither.

It is a call to treat all human beings with respect.

As it is, people in this country live without hope of things ever getting better. Unless you have experienced hopelessness, you can not understand what it can do to a person.

People with authority and power treat you as though you’re worthless. They can stop and frisk you for no reason and shoot to kill if you don’t comply.

It’s completely arbitrary. You can walk through the neighborhood one day and get stopped and humiliated the next.

When you walk into a store, people assume you’re there to steal and you get followed as you browse.

These indignities add up, one by one, day after day.

Michael Brown stayed in school and was about to start college, but that didn’t give him immunity from being shot six times by a white police officer.

The prosecutor said the police officer saw that Michael Brown matched the description that had been sent out as someone who had robbed a convenience store.

First of all, it has been established already that the officer did not have the description, and that, although there was an altercation at the store, the film appears to show Michael Brown putting money on the counter.

Second, if Michael Brown did steal cigars, that should not mean he gets the death penalty.

This is what I mean about living without hope that things will ever get better.

This child’s body lay on the street for four and a half hours. Is it any wonder that residents of Ferguson believe the police were fixing “evidence” while he lay there?

How can anyone be at peace when they live with the disrespect these human beings face every day?

Meanwhile, the people with power have to protect what they have. They have to make it appear that Michael Brown deserved to die and that the officer was completely justified in using deadly force.

How can they have any sense of peace when they’re living in fear of an uprising because of the injustices they perpetrate?

When I say, “No justice, no peace,” I mean that we can’t have peace on either side as long as part of the population lives with intimidation and fear, underpaid, disrespected and with no hope of anything changing.

Instead, he will walk away, his actions condoned. That sends a powerful message to people whose lives are affected every day by indignities and disrespect. When you remove hope from someone’s life, they have nothing to lose by lashing out in anger. Their neighborhood feels like a prison, so what do what have to lose by rioting and lighting fires?

We can’t live in peace if a minority of the population spends all its time trying to protect itself and its power and wealth by denying the rights of others to live a decent life.

Things won’t get better until we truly understand the meaning of “No justice, no peace” as a call to respect others and not as a call to rebellion and violence.