Forgiveness is a tricky thing

Christians believe we are redeemed — forgiven for all our sins — if we believe Jesus died for us.

Some Christians seem to interpret that as license to commit sins, knowing God’ll forgive because, well, Jesus.

I’m not so sure. On the one hand forgiveness is more about me than you. I never sensed any remorse from my grandfather for molesting me throughout my childhood, but I had to forgive him. I had to let it go so I could cease allowing his abuse to define me. But I also kept my distance from him because I knew he wasn’t safe.

I would love to see the doctors who refused to treat my son, knowing he would die, suffer some consequences, but that’s not going to happen. I can’t allow them to live, rent-free, in my head, so I have let go of my anger and outrage. If any of them approached me and said they wanted to work with me toward Medicare for All, I would stand with them as brothers and sisters in the fight.

But, as my mother’s pastor once described it, sin leaves a scar. He pierced a piece of paper with a pencil (the sin), then removed the pencil to show a hole — a scar. The sin is gone, but the damage is still there.

Watching an African-American man hug the woman who murdered his brother in cold blood sent a chill up my spine. I didn’t feel comfortable thinking, “Awwww, that’s so Christian of him.”

And my mind went back to the young man who murdered nine African-American people in an act of racial hatred in Charleston, SC. The survivors of the massacre, family members and others stood in front of microphones and offered forgiveness to the unrepentant racist.

That made me uncomfortable, too.

It seems people of color keep forgiving the people who murder them, but the other side of the coin — the remorse on the part of the killers — is blank. A blog post by Rev. Karyn Carlo that I read yesterday called it “cheap grace.”

Cheap grace is a scenario where someone is called to forgive again and again and again, but the object of forgiveness keeps committing the same sin. The phrase keeps spinning in my head.

We keep allowing black people to forgive white people for killing them, and all too often the white people walk free. Systemic racism continues while black people are still called to forgive. Jail sentences are more common and more lengthy for people of color. Schools are poorer and still segregated. Access to health care is worse. Access to the vote is far less and getting worse.

If Botham Jean had walked into her apartment “by mistake” and shot her, he would be on Death Row. But we assuage our collective guilt by saying “Awwww …” when we see his brother embrace and forgive the woman who murdered him.

As a white woman, it’s not my place to forgive the killer of Botham Jean or the racist who slaughtered nine people in Charleston. It is my place to listen and follow. It also is my place to work toward racial economic and social justice.

Where is my compassion? 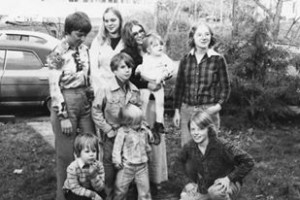 The siblings and their children in 1977. Bill is on the lower right corner.

The two young men who owned Waking Life Espresso in West Asheville are sorry for their behavior. It appears they really are undergoing some serious self-examination.

In my mind it’s too little, too late.

I do feel badly about what they’re going through. It isn’t easy thinking everything is OK and you’re a real player and all, and then having all of it come crashing down around your ears. I know that must be almost as hard on them as the women who were their victims.

But I’m not ready to give them my energy.

Right now, I’m giving that energy to my brother, who is in prison in California for molesting his daughter.

I wanted to walk away from my brother, and I stayed out of touch for several years. But early this summer I got a letter from him. He is alone. Really alone. No one is interviewing him and asking what his future holds. We know what it holds — another 30 years behind bars in a for-profit prison, where he has no money and not enough to eat.

California is charging him $10,000 in restitution, and if I send him money for extra food, the state takes most of it. The rest goes into the pockets of the profiteers who run the prison where he is incarcerated.

The health care in his prison is horrible — one of his fellow inmates died from an asthma attack a couple of weeks ago because he wasn’t getting the care he needed.

As a survivor of abuse, it was hard for me to read his letter and understand his desperation. It took him 10 years to admit what he had done. After he had stopped abusing his daughter because he found God, he figured it was OK if he denied what he had done to humans, as long as he confessed to God.

He has learned that’s not the case, and he has confessed and is trying to work through his guilt and shame. He, too, is a survivor of child sexual abuse. He knows it’s not likely his daughter will be able to forgive him, although he prays it will happen someday. He also prays for reconciliation with his wife.

So now, with me being the only person who will stay in touch with him, I have to try and help him see there is hope for tomorrow. I have to be his support, no matter how much emotional energy it takes. I have to remember that he is human and no one deserves to be utterly alone.

So, when people suggest I need to forgive the two men from Waking Life, who have lost their business but not their freedom, I have to say I will leave that to others.

I chose not to listen to the interview that came out today. I don’t think that means I am unkind or unforgiving; I think it means I have enough emotional work on my plate right now that I am caring for my brother’s needs.

Forgive the creeps at Waking Life? Not yet.

We had a bit of a storm break out in West Asheville over the weekend when a local blogger, Emily Trimnal of Asheville Blog, broke the news that the owners of Waking Life Coffee were the authors of a disgusting, misogynistic blog about their sexual conquests.

Shop owners Jared Rutledge and Jacob Owens wrote posts about the women they had “conquered,” often making fun of the women’s trust in them.

As soon as they were outed, they were sorry as hell. They posted some navel-gazing drivel about their motives and how really uncomfortable they had been the whole time.

In the aftermath, many, including myself, have decided we would rather die of thirst than give their business a penny.

Others have posted that Jacob and Jared don’t deserve to have their business shut down. Let’s be forgiving because, after all, how are they worse than others who use and abuse women sexually?

They aren’t worse, perhaps, but they are as bad, and just because we don’t know about some abusers doesn’t mean those we do know about should get away with it.

As a survivor of abuse, I believe these men deserve whatever karma dishes out to them. And I think having your sex life exposed by men who see you as nothing more than a place to park their penises for an evening is abuse

Let’s talk about what their victims are going through as they read about the fact that they were nothing more than a conquest. Imagine you trusted someone, perhaps even believed he liked you as a human being. You even thought this relationship might have the potential to be something special. They you discover what you really were — a notch in some dick’s dick.

And of course, we as a society usually blame the women for allowing these miscreants access to their bodies. She wore something alluring. She went to a bar. She invited him into her home.

This does not give anyone permission to disrespect, belittle or otherwise abuse you any more than a lame I-knew-I-was-doing-something-wrong gets you off the hook.

As my friend, Jodi Rhoden, pointed out on Facebook this morning, the only reason we believe this story is that the men themselves confessed. If the women had come out and said this had been done to them, would we have been so quick to condemn the men?

Our word is valued less than that of men. When we accuse, we are scolded for dragging men’s reputations through the mud because, after all, it takes two to tango.

Let’s say Jared and Jacob really are sorry, and not just because they got caught but because they had an epiphany. That’s all fine except the damage is still done. Women are still humiliated, their reputations in shambles. The hurt is there for good. The scars last a lifetime.

It’s not up to me to forgive these two men; it’s up to the women they humiliated. And even if they are forgiven, the scars of their deeds remain. You forgive so you can move on in your own life, so that you, not so much your abuser, can have peace.

You can’t undo this kind of damage. When you see human beings as objects and use them as such, you have caused permanent harm.

The owners say they will close up shop for a few days, and when they reopen they will donate profits to Our Voice, a nonprofit that works to fight violence against women.

I have a better idea. Let’s stay away from Waking Life and donate to Our Voice. That way, an agency that does great work gets our support and two misogynists don’t.