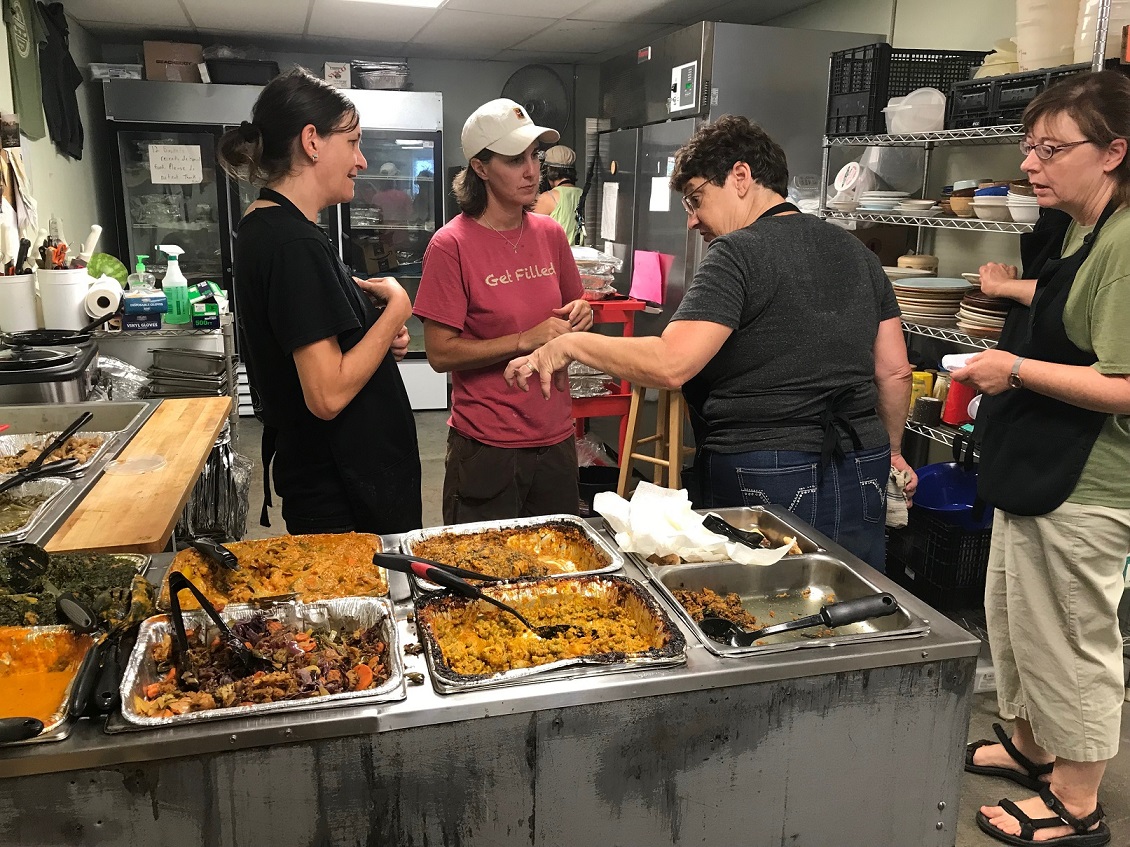 A year ago, I was arrested in Washington for disrupting the Senate as its members prepared to debate repeal of the Affordable Care Act. I was  sentenced to 48 hours of community service.

I went straight to 12 Baskets Cafe, where I’ve volunteered a couple of days a week since — long after my sentence was completed.

Almost every Tuesday and Thursday, you’ll fine me standing near the door, scraping plates into a large compost bin. My position allows me to greet everyone who comes in and to make sure people have had enough to eat before they leave.

I see all kinds of people, not just poor and/or homeless, but working people, retirees who want to stretch their budgets with some good, nutritious food.

The cafe is in Kairos West Community Center off Haywood Road at State Street in West Asheville, and it was classed as a community center when the permits were issued for the cafe to open.

The Rev. Dr. Shannon Spencer, who opened the cafe through the nonprofit Asheville Poverty Initiative, puts it simply: “It’s not what we serve, it’s who we serve.”

Apparently, that changes everything. When you help people who have nothing, you become a “shelter,” and the city tries to shut you down.

The excuse is that there’s a school nearby and people have found some used needles in the area. So, the cries of, “Save the children!” begin, as though no people who suffer from addiction should be allowed to travel in circles that come within a few hundred yards of a school or church.

The trouble began when a group of itinerant people came through, enjoyed lunch and then set up camp in the side yard of the cafe.

The television news came in and interviewed tourists across the street at Sunny Point Cafe, and the tourists didn’t like looking at poor people while they were on vacation.

So, the local newspaper jumped on board to do a story and no one spoke to anyone from the cafe, even though there’s someone there who can speak every single weekday from about 9 a.m. to 2 p.m. The story just said no one was available for comment.

When I worked as a reporter, the story would be held until someone could speak for the cafe. We didn’t print one-sided stories without several attempts to speak to someone. I have encountered public officials who refused to return calls, and in those cases, the stories that ran detailed attempts to reach someone — “So-and-So did not return seven calls to his office, three to his home and six to his mobile phone over the course of three days.” This one would have read, “We tried to call 12 Baskets at 6 p.m. one night.”

So, viewers and readers are left with the impression that homeless people are doing drugs in the yard, that neighbors are at wits’ end with the chaos and cafe staff are allowing it, when the reality is that our neighbors support us. Some bring us food from their gardens, others come in and enjoy a meal.

The problem here is that we live in a society that drives people into poverty with low wages and few worker protections and then vilifies them.

Many of the people who eat at the cafe are working; some have disabilities that keep them from working. A number of them are in recovery from addiction, and some are still using.

If we’re a community center when working people eat with us, but an illegally operating shelter when our patrons are poor, the problem isn’t with us, it’s with the community.

If you want to know more about the cafe, come have lunch with us. The food comes from some of the best restaurants in town, from EarthFare, Mission Hospital and others. We seem to specialize in curry dishes from Indian restaurants’ buffets, but we have fresh fruits and vegetables, breads, muffins, pasta dishes … it’s different every day, and it’s all delicious.

The name 12 Baskets, by the way, comes from the story of Jesus feeding the multitudes from 12 baskets of fish and bread.

Yeah, if you have to ask what Jesus would do, the answer is in our name. He took 12 baskets of food and fed 6,000 because they were hungry. He didn’t ask whether they could pay, he just fed them.

‘My children are my heart.’

September 10, 2012 a world of progress, letters, progressive living No comments

‘My children are my heart,’ she said. This is a woman who understands that no mother should lose her child to a broken system.

I watched a little of the GOP convention before my head came dangerously close to exploding. Chris Christie was loud and obnoxious. Paul Ryan hardly spoke a word of truth. Mitt Romney was no more honest.

And while Ann Romney talked about what a wonderful man her husband is — and I’m sure she thinks so — it was Michelle Obama who was the highlight for me.

I love Bill Clinton as policy wonk. He was, as always, a rock star. But let’s not forget that he was the president who signed the repeal of the Glass-Stegall Act and NAFTA and other free-trade agreements that wound up sending so many jobs overseas. Still, it was a great speech.

And Joe Biden, as always, was heartwarming and sincere, calling his wife “Jilly” and asking her why she waited until the fifth time he proposed to accept. I keep remembering his speech in May to the families of people killed in Iraq and Afghanistan and the way he used his own experience of loss to offer them hope.

But Michelle was just amazing. Her speech was so from the heart. When she talked about her children — “My children are my heart.” — and her eyes welled with tears, I knew she understands what kind of pain I live with every day. I knew she’s on my side when it comes to helping the poor, the sick, the hungry, the homeless, the forgotten. She knows they all are somebody’s children, and none of them deserves to suffer because of the greed of the few. She has compassion, which is rare among people in Washington.

I can’t say I’m happy with all of President Obama’s policies, or the way he has backed off to try and compromise and then gone too far — taking the public option out of the Affordable Care Act, for example. And the fact that we’re still sending out drones that are killing innocent people.

But I want Michelle in the White House. I know she’s a champion of all of us.

Ann, honey, you still don’t get it

April 12, 2012 a world of progress, progressive living No comments

Ann Romney defended herself in a Tweet yesterday, telling political pundit Hillary Rosen that the had chosen to stay home and raise her five children.

Rosen, who may have been a little harsh, said she believed Ann Romney had little understanding about the lives of working women because she never held a job. Whether you say it harshly or gently, it is true. If you haven’t held a job while trying to be a good parent, you can’t understand the challenges.

Yes, Ann, it is very hard work raising children, but you can’t fully understand trying to hold a job and raise children unless you’ve done it. I’m not saying it to criticize; I’m just saying that’s how it is.

In your Tweet, you mentioned you chose to stay home. Therein lies the problem. The operative word there is “chose.” Choice in the matter is not something most of us have. Had I not worked, my kids and I would have been homeless. Even after I remarried, our combined income left us with little extra after the bills were paid. We didn’t own a home until we were 40 because it took us that long to save for the downpayment.

Income for most working Americans has gone down precipitously since the 1970s because of the attacks on unions and worker rights. If manufacturers couldn’t get their workers to offer up enough concessions, the jobs went to China. You never had to worry about that because your husband’s job was to “trim the fat” from companies he bought. That usually meant that people in the working class suffered.

I don’t blame you for the business or political policies of your husband, even though I disagree with him on many, many counts. What I’m saying is that you have no experience with struggling to make ends meet while you worry whether your job will be downsized or outsourced, and at the same time trying to be a good parent.

Studies show that children whose parents are wealthy are less likely to have compassion for people who are poor. Although some people can overcome the disadvantage of growing up advantaged, it’s more difficult to have compassion for something you never experienced. Your Tweet proves that. It never occurred to you that you had a choice most of us never had, or that things for most of us working Americans have gotten much harder.

I’m glad you had the choice to stay at home. But you still have no way of understanding the struggles of a woman who has to work and still wants to be a good parent.