What a devastating day 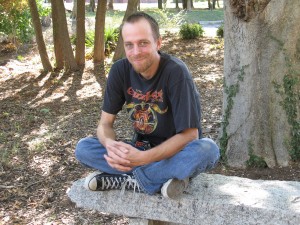 This is my son, Mike, who was so impoverished by the time he died that he left behind very few belongings. One of those was stolen last night.

I have very few things that belonged to my late son, mostly because our broken system impoverished him to the point that he had very few belongings.

This morning, I found that one of them, his iPod, had been stolen from my car. I bought it for him a few weeks before he died because he had always wanted one and we didn’t know whether he would survive to see his first disability check.

As it turned out, he didn’t. He was dead nine days before that first check arrived, but at least he’d had the chance to enjoy that iPod for a few weeks.

All day, I have felt his loss anew, a stabbing grief that won’t go away. His photos were stored on that device and it was in a compartment in my car, together with a charging cord.

The thief also got away with a projector that belonged to my nonprofit, WNC Health Advocates, a Bluetooth speaker and some other odds and ends, altogether about $1,000 worth of stuff.

When I reported it at the Sheriff’s Department, the deputy behind the glass acted as though I had invited the thief in and handed him my belongings because the driver’s side door was unlocked.

“What are you doing with a thousand dollars worth of stuff in your car, anyway?” he asked, scowling at me.

Not only did I feel violated by the theft, I was blamed. I was the person at fault.

I was left wondering if I would have been so shamed and blamed if I had been a man.

I was so upset, I came home and called Sheriff Van Duncan, who apologized profusely for the way I had been treated.

Meanwhile, I have struggled to hold back tears all day. This is more than a loss of a thing — that thing was connected to my beloved son, and it’s one less connection I have as the days since I last was able to touch him and hear his voice add up.

I left a profane post on Facebook after I discovered the loss, but I know I won’t see that iPod, or the photos he had stored on it, again. The f-bomb helped for a fraction of a second, but it would help more if I could find the person responsible and explain what that small thing meant to me. My first impulse would be to smack him (or her) upside the head, but I wouldn’t actually do that because physical violence never solves anything.

But I would like that person to understand they pain their actions have caused.

It’s bad enough I have to face the rest of my life without my son, but can’t I at least have this one small connection to him?

Maybe this is punishment …

August 27, 2011 a world of progress, progressive living No comments

Irene as it approached the US.

A Pagan friend of mine suggested that perhaps the earthquake was meant to shake up and dislodge some of our old and misguided ways and Irene is meant to wash them away so we can start anew.

My husband joked that perhaps God is punishing us for being so conservative.

You can be certain that eomeone will say in all earnestness that God is punishing us for being open to allowing gays and lesbians to marry, but I like to twist that up a bit. If the devastation is punishment, maybe it’s because of our mean-spiritedness toward people who need help: the elderly, people who are poor or have disabilities, children, the working class, people who can’t get health care without help.

Instead of asking the wealthy and huge, multi-national corporations to pony up and pay their share, we villify the poor and middle class and because the corporate media control information, many of us believe we  are  to blame for the country’s financial troubles. We believe people who are out of work and collecting unemployment are lazy, and that teachers make too much money and we can’t afford to give everyone access to quality health care. We believe the wealthy are “job creators,” even though they’re sitting on more money than at any time in our history, and they’re looking for ways to amass even more at the expense of the poor and middle class.

Most of us feel powerless in the face of all this abuse — the abnsed often do feel that way, like there’s no way out.

Of course, I don’t believe in a god who throws thinderbolts around, but I do believe a little bit in what the Bea Arthur TV characrter, Maude, used to say: “God’ll get you for that.” You reap what you sow, in other words. In some way, your mean-spiritedness will come back and bite you in the ass. I don’t need revenge; I just need to believe that somehow, some way, there will be asses chewed.

Call it God, Karma or the Way of the Universe, your ass will get bitten, Koch brothers, John Boehner, Mitch McConnell, et al. Stay safe through the hurricane because We the Paople are coming in October and we’re staying until you’re willing to listen.