Last night, somebody shocked me by telling me I was talking “nonsense” when I insisted out current health care “system” is broken, and that we have to move to single-payer.

“We need to preserve our system,” she said, and proceeded to try and shame me into supporting Joe Biden or another “moderate” who’s beholden to the profit-mongers currently in charge.

I was appalled that anyone knowing how I lost my son to this mess would say that to me.

I told her she was talking privilege.

She has the privilege of being covered by an insurance plan she can afford, co-pays, deductibles and all.

She has the privilege of not needing immediate help that’s just unavailable because she can’t afford it.

She has the privilege of not having watched someone she loves more than life itself draw his last breath because nobody would help him.

She has the privilege of being able to wait for politicians get off their asses and do something about the 35 million Americans who have no insurance, and the millions more who have insurance with a deductible so high they can’t afford to use it.

She claimed she has no such thing as privilege, that she just wants people to be able to get health care.

But she can’t see that tens of millions of Americans are going without while she calls me stupid for wanting them to get immediate access.

She probably thinks we can wait a few years for the minimum wage to hit $15, too. But if you’re making $7.25 an hour, you can’t wait for that raise. You need that money now. If you think otherwise, your privilege is showing.

If you hold the people at our borders in contempt because they walked a thousand miles with their children to escape drug gangs — gangs that are the direct result of US drug policy — your privilege is showing.

If you think our policy of incarcerating people — non-citizens or citizens — in private, for-profit prisons, not feeding them enough (I know about conditions in private prisons because my brother is in one) and then “contracting” their labor out to the highest bidder, your privilege is showing.

If you think the people in Flint and other cities with lethal contaminants in their water can wait for it to be fixed, your privilege is showing.

If you think it’s OK to keep somebody in jail for months as they await trial for a nonviolent misdemeanor like falling asleep on a park bench, causing them to lose their jobs, housing and even their kids, just because they can’t come up with $250 cash bond, your privilege is showing.

If these things and other atrocities perpetrated by the fascists in Washington are OK, it’s because you have a warm bed, clean water, access to health care, reliable transportation, enough food — in other words, privilege.

If you think poor people are just lazy and only want a handout, your privilege is showing big time.

And if you’re white and male and you don’t see any problem with the way things are, you’re particularly privileged.

When you have such privilege and you deny it, I find that deeply offensive. When you call me stupid because you can’t see your privilege — even when it’s pointed out to you, you are even more despicable to me.

When you have such great privilege and you deny it, you are willfully ignorant, and there are few greater sins in my book.

I know it’s hard to recognize our own privilege, but we must if we are to move toward a just society for everyone, not just for you. 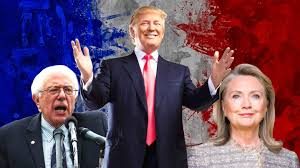 I’m feeling beyond frustrated today as I listen to the acrimony between Hillary and Bernie supporters, each blaming the other for the demise of the Democratic Party.

I support Bernie because I want someone who will fight for universal access to health care now.

Yes, I know it will be blocked by Republicans, but if we start negotiations in the middle, we wind up with an agreement right of center and with millions of people still without care.

When President Obama and Nancy Pelosi took single-payer off the table, we lost all hope of getting that public option that would have given me a choice to buy into Medicaid. It would have offered competition with the insurance companies, which now have a legal monopoly. What we got was a half-assed solution that, although it offered millions of people the chance to buy health insurance, it shut out millions more and left the for-profit insurance companies in charge of the system.

We’re seeing employers stop hiring full-time employees rather than give money to the insurance companies. We’re seeing people having to buy high-deductible plans that they can’t afford to use, so they’re getting nothing for their money.

About once every 18 to 20 minutes, an American dies from lack of access to care.

But sure, let’s do it incrementally. Let’s tell the bereaved families of these people who are dying that they have to be patient. After all, we don’t want to offend those who support the system as it is.

There are very real and very high stakes in this election. Each election cycle, the corporations gain more ground and we the people lose. We can’t get a living wage, we can’t get universal health care, we can’t get affordable housing, we can’t get reasonably low rate college loans for middle-income kids, we can’t get big money out of politics.

But rather than focus on all that, we follow every move of Donald Trump, who’s only doing as well as he is because the media have decided he’s the story.

You see, in case you haven’t noticed, the media write the scenarios and we blithely follow along.

Four years ago, the media started saying the Republicans would take the Senate in 2014. It was an unlikely scenario, but the media kept repeating it until it became reality.

Now the media are saying Trump will beat Hillary if she is the nominee, and you can bet it will become a self-fulfilling prophesy unless we the people wake up and start thinking for ourselves.

Four years ago, the Democrats ran a lame candidate here in North Carolina, and he was beaten by Pat McCrory (#OneTermPat). As the election neared and Walter Dalton trailed, several Democratic friends told me they thought it was OK.

“Let them have it all and people will be so pissed they’ll send them packing,” people said.

Well, here’s what really happened. We cant expand Medicaid — in fact, we’re about to privatize it, and we’re cutting funding for the care of medically fragile children. That’s right, we’re going to let sick children suffer and die rather than ask the wealthiest to pay their share of taxes.

Our schools are suffering and being choked to death as we give more money to for-profit charter schools. Our teachers are among the lowest paid in the country, and our per-pupil spending is the lowest in the nation. Our once-proud university system is being cut down, bit by bit. In fact, some of our state universities are about to be starved to death, including some traditionally African-American schools.

We can’t raise the minimum wage, so people are in desperate need for social programs, like food stamps, which are being cut. Child care costs as much as college tuition, and we’re cutting programs that help parents afford it while refusing to pay a living wage.

If you lose your job because of discrimination, you can’t sue in state courts, and you have the shortest duration and the least compensation in the country on unemployment. The GOP did that almost as soon as McCrory took office.

Cities and counties can’t set their own wage levels or discrimination policies because of HB2, which most people think is just about bathrooms.

We are well along the road to becoming a third-world country in terms of the life of average citizens. Income inequality is at record levels, global warming is at the tipping point, we keep fighting pointless wars, and no one seems to notice.

We’re so complacent that half of the right-wing nuts who want to establish a state religion and allow people to die in the streets rather than give them access to health care are running unopposed.

So the predictions of people finally waking up if Trump wins the election are wrong. If North Carolina is a predictor, and I believe it is, people will allow him to set up a fascist state because we’re too distracted by the media’s shiny issues to do anything about it.