Rick Bryson will represent we the people 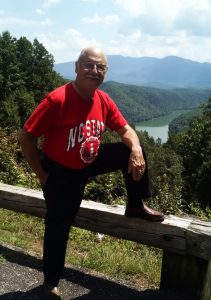 This really is a first for me, announcing in public my support for a Congressional candidate.

I spent 30 years as a newspaper reporter, then six years running a nonprofit, so it was inappropriate for me to support candidates officially and openly.

But this year, I’m speaking up. We can’t allow the reign of the right-wing to continue, and Mark Meadows is about as far to the right as a person can get. Our option in 2014 was another candidate who stands far to the right on issues such as women’s rights, LGBTQ rights and true religious freedom (he is blatantly anti-Muslim).

This time, we have a chance to vote for someone who truly has decent human values. He believes, as I do, that anyone who works a 40-hour week should be able to pay their bills without government help. That means we need to raise the minimum wage to a living wage. If we do that, we won’t need to pay for food stamps or rent subsidies for people who work full-time.

Bryson believes that access to quality health care should be a basic human right and that we can’t allow the Affordable Care Act to be diminished; instead we need to add to its protections by making access to care universal. He points out that the pharmaceutical industry has four lobbyists for each member of Congress. I don’t imagine the health insurance industry is far behind.

Bryson wants to see more support for public education, not less. He wants an intelligent electorate with decent critical-thinking skills. That’s not what Mark Meadows wants; he has supported privatizing education.

We have become very adept at blaming the victim in this country by labeling people who need help as “takers,” but these people are left behind by bad public policy, and the corporate shills who sit in Congress now are only too happy to take more away from working people and give it to the super-wealthy by privatizing public programs like Social Security and Medicaid.

The people here in Western North Carolina have suffered the loss of thousands of good manufacturing jobs, many of them with union protections, which have been replaced with low-wage jobs. The state has been able to force workers into these jobs by cutting unemployment compensation to the bone and shortening its duration.

Rick Bryson proposes a project similar to the Research Triangle, but sprinkling it across Western North Carolina. He calls the plan Generation NOW. It would bring higher wage telecommunications, clean energy, bio-medicine, agribusiness, computer modeling, recreation, design, and other similar jobs to the region.

Anyone who knows me knows my most passionate issue is health care, but we can’t fix health care and nothing else.

I find Rick Bryson’s stands on all the issues to be reasonable and kind. He is intelligent and articulate, and he loves these mountain communities because he has deep, deep roots here. His family has been here for generations (Bryson City is named for them).

I can’t think of anyone who would represent the people of District 11 better than he will.

The best way any of us can help is to turn out on June 7 (early voting starts May 26) and vote in the primary. We can do this if we work together, and if we don’t, we stand to lose a lot more than an election in November.