On Memorial Day, we should stand (or kneel) with those who protest racism 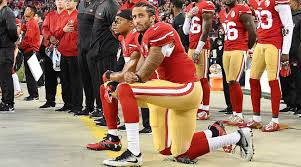 This was never about the national anthem or disrespect for the flag or the military. It is and always has been about systemic racism, and the racist response of the NFL proves that we have a problem.

First of all, let’s get one thing straight: The protest of taking a knee while the National Anthem plays is not directed at the anthem or the flag, nor is it meant to disrespect the military.

Colin Kaepernick originally stayed seated on the bench to protest the police killings of unarmed black men and boys. When a veteran asked him to kneel instead, that’s what he did.

Now the NFL has banned kneeling, and people are screaming that it’s unconstitutional to do so.

That’s not so. Employers are allowed to ban certain behaviors by employees while they’re working. As a newspaper reporter. I was banned from supporting candidates publicly — and that included having political bumper stickers on my car or signs in my yard.

In more and more states, people can be fired for any reason — or for no reason. These are called “right-to-work” states because they ban mandatory union membership.

If the NFL wants to fire people who protest unjust executions and racist policies, it can do so.

That doesn’t make it right.

I am boycotting the NFL because of this and because of its cover-up of the devastating brain injuries its players suffer, not to mention its extortion of money from taxpayers for the construction of stadiums.

But let’s get something straight about those players taking a knee during the anthem. The protest was never about disrespect for the flag or anyone in the military, but about the lives stolen from us by trigger-happy cops who seem to believe these young men and boys’ lives are worthless.

It is almost without exception that young white men who actually have killed people are taken into custody, but young black men like Michael Brown are shot dead in the street for no good reason.

After Brown’s murder, a video of him arguing with a store owner surfaced, as though that justified his slaughter. Dylan Roof executed nine people in a church in Charleston, SC, and he was given a bulletproof vest and fed a burger and fries on his way to jail. But Michael Brown was executed and people used a tussle with a shop owner to justify it — but the cop who murdered him had not seen the video and had no way of knowing the tussle had happened. Michael Brown, an 18-year-old boy, was tried, convicted and executed for walking in the street.

Stephon Clark was slaughtered for having the temerity to use his cell phone in his grandmother’s back yard at night.

Philando Castile was murdered during a traffic stop after telling the officer he had a gun but was not reaching for it. His girlfriend and her 4-year-old daughter witnessed the execution.

Tamir Rice was just 12 years old when he was shot and killed by a police officer while playing with a toy gun in a park near his home.

In Charlotte, NC. Keith Lamar Scott was shot and killed while sitting in his car.

Eric Garner was choked to death by a New York City police officer after being accused of selling single cigarettes.

In Baltimore, Freddie Gray died mysteriously while being transported in a police van.

None of the cops responsible for these murders was convicted of a crime.

In 2012, I attended a gathering to talk about poverty in an African-American neighborhood a few miles from my home. I noticed pock marks in the side of the church where we were meeting. Across the street, an apartment building had the same pock marks and there were holes in the glass.

All of these were caused by bullets, shot by police officers who were chasing a young man suspected of stealing a $300 game console. Fortunately, none of the 76 bullets they shot hit the suspect or anyone else.

When I rose to speak about poverty and health care, I opened with the fact that this would never have happened in my neighborhood because my neighbors are white.

Last summer, here in Asheville, two cops accosted a young man who was on his way home from a 12-hour shift at a local Cracker Barrel restaurant. They beat and tased him. Someone leaked the body camera footage six months later, and the officer, who had been allowed to resign after a four-month internal investigation, was finally charged with assault. His trial hasn’t happened yet, so he still could get off. Despite other officers taking part in the crime and the cover-up, no one else has been charged. And when City Council proposed some changes in policy to reduce the likelihood of this happening again, the police union threatened to sue to stop them.

What we have here is racism so pervasive that it touches people of color every day of their lives — which are all too likely to be cut short by that racism.

So, on this Memorial Day, I will grieve not just for the soldiers killed in our overseas adventures, but also for the innocent African-American men and boys slaughtered by our unjust “justice” system.

May they all rest in peace and may their loved ones find comfort.