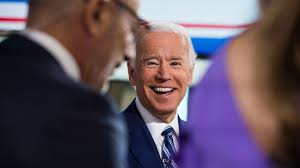 I’m not calling on Joe Biden to leave public life over his creepy way of getting in a little too close to women, but we we try to have a conversation in light of #MeToo, we need to understand that we’re just trying to figure out where we draw the new line of what’s proper and what isn’t.

I’ve spent much of the morning replying to comments from men about how “snowlfakes” are over-reacting to a woman’s complaint that Joe Biden invaded her personal space.

I have asked each man why they think a man has a right to invade my personal space and hug me, rub my shoulders or smell my hair without getting permission.

I also have asked when they were raped or had other sexual violence perpetrated against them — something that would give them the right to lead this conversation.

The #MeToo Movement has opened doors to a redefining of what’s proper behavior and what crosses the line, and we’re still pretty early in that discussion.

Women have been second-class citizens for millennia, and we’re finally seeing cracks in the wall of toxic patriarchy. What we need now is a new definition of that line men shouldn’t cross in dealing with women, and we won’t get that without an adult conversation about women’s very real trauma.

While it’s easy to say we shouldn’t criticize Uncle Joe while the pussy-grabber is still squatting in the White House, my point is that this is an urgent and necessary discussion. In fact, we must talk about it if #MeToo is going to lead to meaningful and permanent change.

What’s more, this is a discussion that must be led by women. Men need to listen, even though that may be hard.

My husband has never raped me or treated me with disrespect, but this is not a discussion where he’s going to take the lead (fortunately, he respects me enough to know that), because he’s not the one who has suffered from the patriarchy, I am.

Women are the ones who have been harmed in so many horrible, cruel and humiliating ways. We have been blamed for the violence perpetrated against us and punished every moment of our lives, just for being female. We have been denied the vote, denied credit, denied jobs, denied equal pay, denied autonomy, had our children taken from us when we left their fathers in fear for our very lives, denied sanctuary from violent men.

The list goes on, but you get he gist here. Men have been the oppressors and still carry a great deal of privilege. Men speak over me and minimize the trauma I have suffered at the hands of men. They told me my menstrual periods weren’t that bad when I was doubled over with a pain they’d never experience. They told me I was lying about what I was eating when I started gaining weight for no apparent reason, and then told me I was doing great when I was so depressed I lost my appetite and lost a whole lot of weight.

These things don’t just happen, they are deeply embedded in society, and we need to dislodge these behaviors. #MeToo is about we women using our voices to seek justice and societal change in attitudes toward women.

Men want to know what’s appropriate, and when we hold up Joe Biden and say, this is a little over the line, men (and some women) scramble to defend him.

The conversation here needs to be about where we’re going to draw that line. It has little to do with Biden’s qualifications to be president and everything to do with whether his behavior will continue to be seen as acceptable.

I love a good hug. There are few things more calming and reassuring. When my son was sick and after he died, I sometimes needed hugs just to stay upright. But I gave permission for those hugs, or I asked for them.

Before my son got sick, I wrote a huge piece for the paper here about how the state was neglecting children with disabilities that changed state policy and then won a big award. I e-mailed the notice of that award to my editor, who then came running out of his office, stopped a few feet from me and said, “Can I give you a hug? This is so huge, I just don’t know how else to respond!”

He got his hug, along with my undying respect.

A lot of us are creeped out by overly close men because men have hurt us. No, I don’t blame every man for the deeds of a few of them, but you have to understand that men have caused my trauma, and if you’re a man, you need to be aware of that.

If you stand a foot away from me and I take a step back, that probably means you’re too close and I want to have my space. If you take that step closer to insist that you control the rules of engagement, I will walk away.

Joe Biden seems like a good guy, but he is also a perfect example of a man who needs to step back a little. And those who defend him, and those who criticize women who are trying to talk about this, need to sit down and listen.

I understand that the rules have been one way for millennia, and that they’re changing rather abruptly, but that’s not an excuse to condone behavior that makes women uncomfortable — or worse.

We’re working on new rules. You can join the conversation or not, but this will happen either way.