Listen to the voices rarely heard 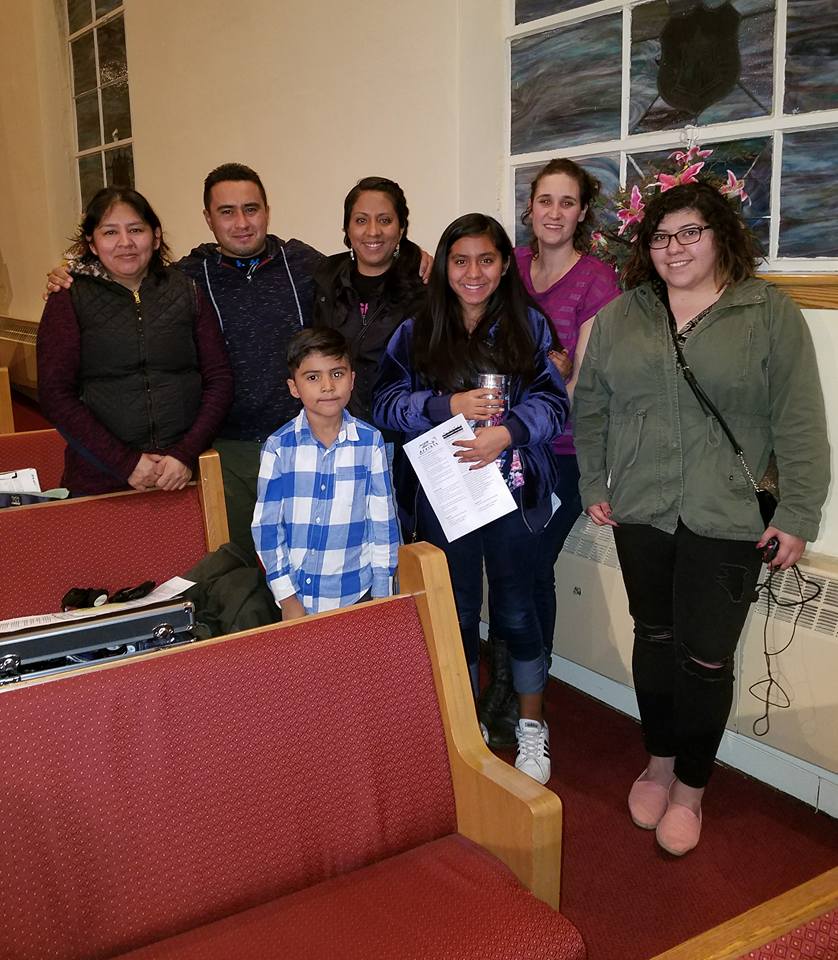 Mirian Porrras Rosas of Nuestro Centro with family and friends after her talk at the Poor People’s Campaign: A National Call for Moral Revival Town Hall. Photo by Ellen J. Perry

I learned that sometimes we need to set aside the rules and just listen.

I am on the NC State Coordinating Committee for the Poor People’s Campaign: A National Call for Moral Revival. In this position, I organize events to get out the word, and these events, like the campaign itself, are meant to include people who are affected by poverty.

So, each speaker, either clergy from a wide range of faiths or people affected by poverty, is supposed to talk for three minutes. We have people who time the remarks and hold up cards to let speakers know how much time they have left.

I’m a stickler about this because when someone speaks longer, he or she takes away time from people who come later in the program. Last night’s event in Asheville was not going to be an exception.

But then Mirian Porrras Rosas of the organizaton, Nuestro Centro, stepped to the podium. She spoke first in Spanish, and at five minutes, I asked one of the other organizers whether we should gently let her know she had run over her allotted time.

Then I sat back down and shut up. She finished her remarks at about seven minutes and then invited her son and daughter and another woman to stand with her as she struggled to translate her words into English.

We, the white people who are usually the ones demanding that others get a translation, had been exposed to how that feels. We could only watch her body language and her facial expression as she issued a plea for this country to treat her and other immigrants with the dignity they deserve.

I sat back in my seat and paid attention, even though I didn’t understand the words.

As she spoke her words again, this time in English, I was taken by her simple eloquence, her poise and her determination that her children have a better life and that she and they be seen as fully human. I stopped worrying about time and started to learn.

Three generations ago, my family came to this country to find signs reading, “No Irish need apply.” Today, immigrant families are accused of being “illegals” whether they are here with or without documentation.

No human being is illegal.

We stole this nation from the people who were here when we, white Europeans, arrived. We committed genocide.

Perhaps we should be happy that the people coming now would rather join us than kill us.

Perhaps we should embrace the stranger, as every major religion demands we do.

Perhaps we should listen more and talk less if we want to know what people’s lives are like before we offer to help or to do something for them that they can — and want — to do themselves.

How many of us know what it’s like to sleep under a bridge in sub-freezing weather? How many of us live with the fear that the police will stop us because we speak English with an accent? How many of us are called lazy and worthless every day because, even though we work 60 or more hours a week, we still can’t pay our bills because our employers refuse to pay us a living wage in exchange for a week’s work?

And how many of us have sat down and listened — really listened — to the voices of people who are living these experiences?

Perhaps we should suspend the rules a bit and listen. When we do, we will hear the voices of our own immigrant ancestors, of the people who worked as children in the textile mills of New England, of the migrant workers who harvest the food we eat, of the descendants of enslaved people who still struggle to achieve equality, of the prisoner who will never be free because of unjust sentencing laws.