It isn’t about hate? 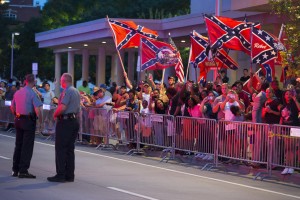 When President Obama arrived in Oklahoma City last night, he was greeted by a crowd of people waving the Confederate battle flag and shouting their displeasure.

While it’s true the majority of people there had come to support the President, this group of about 80 people made the whole city look bad.

I know I said awful things about Bush, Cheney & company, and I stand by those things because it was about policy. I was willing to give Bush a chance after the Supreme Court anointed him, but he blew it all on two ill-advised wars, one of them an illegal invasion of a sovereign nation that had nothing to do with the attack on 9/11.

President Obama has just finished crafting a deal with Iran that will bring them back into the world economy and allow for inspections of their nuclear program. He did it without “boots on the ground” or bombs in the air.

And he was attacked as soon as the deal was announced.

War is big business, and if we stabilize things in the Middle East, there might be no more war there. That would make the Military Industrial Complex unhappy.

And if, as our president wants, we revamp our “justice” system, big jail corporations lose money.

Do you see a pattern? Of course. But Fox News viewers won’t see it because they’re swallowing everything the fear-mongers have to say.

This president, although I disagree with him on some issues, has accomplished a great deal in spite of every effort by the Republicans to derail him.

Hate him all you want, but history likely will judge him as one of our best, and Bush will go down as our worst.