I’ll decide when I need your “protection” 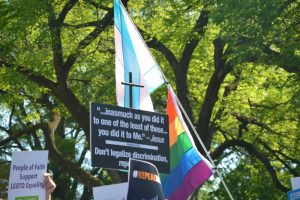 In Raleigh yesterday, more than 1,000 of us gathered to let the General Assembly and the governor know we do not approve of what I call Hate Bill 2, also known as the “Bathroom Bill.”

At least as many gathered behind the General Assembly Building to support it.

But a look at the two gatherings showed stark differences. The first was in the diversity of the crowds. The pro-bill folks were overwhelmingly white and mostly older. The anti-HB2 crowd was young and old, black, brown and white, gay and straight, male, female, gender-noncomforming, people of all faiths and people who have no professed religion.

We sang freedom songs, they sang Christian songs, the meanings of which they obviously didn’t understand.

Since I am a Christian, I can speak for what I believe, and I believe that Jesus, the leader whom I profess to follow, spoke not of hate and not even of tolerance; he spoke of love. He spoke of not judging others, and of standing up for “the least of these.”

The pro-HB2 crowd carried signs that claimed they want to protect women, but I don’t need or want their brand of protection. I can take care of my own protection, especially when you think you ought to “protect” me without my permission.

I am an adult. I will make my own decisions — including the decision of when and where to ask for anyone’s protection.

I have never felt threatened in a public bathroom, but I was not safe at my own grandfather’s house. Does this mean all grandfathers should be denied the chance to be alone with their granddaughters. Of course not; that would be absurd. And so is this law.

There are no incidences on record of a transgender person assaulting someone in a bathroom. In fact, most of them likely will tell you they often feel threatened. They certainly are far more likely to be harmed by cis-gender people in a public bathroom than they are to harm anyone.

They just want to go into a stall, close the door and do what they came to do.

The real problem is that the law has little to do with bathrooms; it is about a power grab, about denying local governments the ability to set their own policies, and about denying everyone the right to sue for discrimination in state courts.

We stood in Raleigh yesterday to demand repeal of the entire law, and then we sat down in the General Assembly Building to wait to be heard.

Of course, our legislative leaders had no desire to hear what we had to say, and instead of meeting with us had more than 50 of our people arrested.

We are not going away. We are not giving up. We are seeking justice for our LGBTQ brothers and sisters, and we will not stop until we get it