Hoping won’t stop this. We must resist. 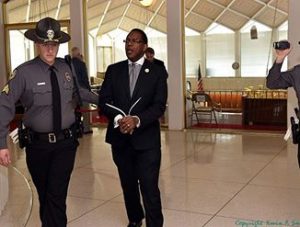 My friend and Moral Monday colleague, Rev. Curtis Gatewood being arrested last week — again — in protest of the unjust actions of the NC General Assembly.

Stop pretending that the Electoral College or the Department of Justice will come to our rescue like a prince in shining armor to stop the Orange One from taking office on Jan. 20.

The election was in all likelihood stolen by a combination of Russian interference and a little tampering with the technology by GOP operatives, but we are creatures of habit and we won’t hold a new election, nor will we hand the office to the person who won the popular vote by nearly 3 million votes.

We have been trained to be lazy and accept what happens — that’s why more than half of us didn’t even bother to vote in the most important election of our lifetimes.

It’s not going to happen, so just get over it.

Blaming voters for the slow-motion coup that has been plotted and executed since Nixon devised the Southern Strategy will not change things, it will only serve to further divide us.

Trying to persuade people who voted for him that they were conned won’t work, either, because they have been brainwashed by the propaganda machine that is Fox News. Arguing with them is a waste of time and energy because they operate in a different reality with different facts. They already believe he won in a landslide.

To continue to concentrate on the sheep who have been led to the slaughter does nothing but divide us, and that weakens us.

I am being realistic here. This man will take office and he will appoint right-wing justices that will change the direction of our nation for decades. He will destroy what little remains of our social safety net and he likely will get us into devastating wars. 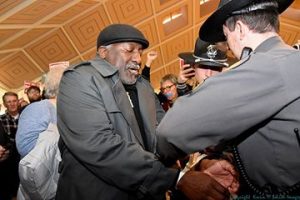 My friend and resistance colleague, Rev. Kojo Nantambu, was arrested last week with more than 50 others. (Photo by Kevin Smith)

So what do we do?

We resist. We band together and work to defeat this vile creature at every turn, using everything we can.

Look at what we are doing here in North Carolina. We have spent the last four years protesting, educating and putting our bodies on the line.

We have sued to overturn unjust laws, and we have won.

We have been arrested by the thousands and brought national attention to the travesties wrought by these right-wing ideologues.

We still have a veto-proof GOP majority in the legislature, but we have a new governor and attorney general. And the courts have ordered the ridiculously gerrymandered districts to be redrawn and new elections held next year.

We continue to resist. Just last week, we packed the gallery to witness the power grab that was about to take place. Some 60 of our number were arrested for refusing to leave, charged with trespass in a public building while it was open to the public (I have been arrested and charged with that twice and have yet to be convicted).

We write to our legislators, even when we know damn well they won’t listen.

Two years ago, I worked my ass off to defeat my state representative, Tim Moffitt, who was among the worst of them. I knocked on doors, I made phone calls, I registered people to vote and gave them rides to the polls. His opponent, Brian Turner, won (and ran unopposed this last time).

We can resist. We can put our bodies on the line when necessary. We can show up and let them know we see and will resist what they are doing.

So, please stop waiting for the Justice Department or the Electoral College to save us.

We must do the work ourselves, together, in solidarity.