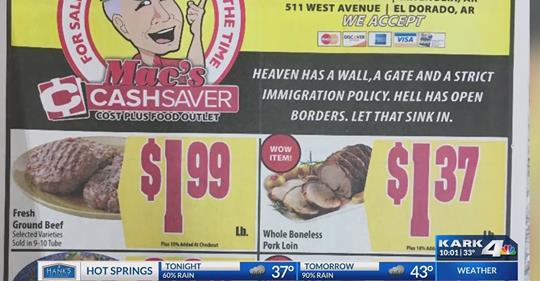 I call this bad theology and bad business.

Recently, a “Christian” grocery store sent out a mailer claiming Heaven has walls, a gate and a strict immigration policy, and Hell has open borders. Then it uses the hackneyed phrase, “Let that sink in.”

On a Facebook post about this, a woman commented with a quote from Revelations certifying that, indeed, Heaven is gated and guarded. I suggested that a fevered hallucination by an old man alone on an island isn’t the best way to make public policy, and, of course, she went off. After a couple of exchanges, where she called me some nasty names, I replied that she probably should pay more attention to the words printed in red, since, as a Christian, she’s supposed to follow those words. I told her the theology of hate and exclusion is pretty effed up in my opinion because I don’t get any racism and bullying from those words in red. What I do get is the Greatest Commandment, which is in two parts: Love God, love each other.

I grew up among “Christians” who wanted to exclude everyone who wasn’t their brand of “Christian.” In fact, there was constant talk of taking over the country.

This was in the 1960s, when we were actually making progress on social justice issues, and they hated it. They hated giving the vote to African-Americans. They hated giving women the power to live on their own and manage their own finances, get credit in their own name, control their own bodies — to be human in our own right. They were vocal and mean-spirited about their hatred of anything different, and they used the Bible to back up their narrow-minded views.

There was actually a guest preacher at my church in 1969 who, from the pulpit, said, “We are doing God’s good work in Vietnam, killing those godless (racial epithet for Asians).”

I approached him after the service to say I don’t think God wants us killing any of God’s children. My pastor scolded me for being disrespectful, but I countered that I was being very respectful — respectful of the lives of God’s Asian children.

These so-called “Christians” ran candidates for school board to try and get their narrow-minded, mean-spirited views into the schools. They took over local elections and then moved on to the state and national levels.

The creature currently squatting in the White House is their creation, and they embrace him because he is as filled with hatred as they are.

It took them decades, but they are powerful now, these so-called “Christians.” Jesus would be appalled at their interpretations of his words.

I have no patience for hate, bigotry and exclusion in the name of Jesus, a man who preached love and inclusion.

For 30 years, I had to hold my tongue when faced with these things because I was a reporter and I had to be unbiased. Franklin Graham thought I liked and admired him when I interviewed him. Maybe that’s why I’m so vocal about it now. Because silence in the face of injustice is, in itself, an injustice.

People who call themselves “Christian” and who spew their hatred in the name of Jesus are just wrong. Christians have used the Bible for generations to uphold racism and misogyny, and we need to call that out every time we see it.

We can’t allow religion to be used as a club to beat those who are already down, and we can’t stand by while the public policies of hate embraced by these “Christians” continue to harm and even kill our impoverished brothers and sisters.