Guns are the problem 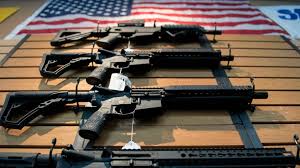 Guns are the problem.

You can deny it all you want, but that’s the truth. Guns kill people. Sure they have to be in the hands of someone, but you can’t have mass shootings without guns.

Take the guns out of the hands of these angry white racist misogynists and the carnage will stop. It really is that simple.

Someone commented to me yesterday that cars kill people too. The difference here is that guns are manufactured expressly for the purpose of killing, I told him. Cars are made for transportation and accidents happen. People drown in bathtubs, too. Big deal.

He tried to tell me guns have purposes other than killing people. What about hunting, he asked.

I told him my father always brought home dead animals from hunting, and if that’s doing it wrong, perhaps I’d better talk to other people in my family who hunt.

Also, hunters who want to eat what they hunt don’t use assault-style weapons because you can’t eat an animal that’s been shot with one.

The problem is guns.

If these angry white men couldn’t get their hands on guns, we wouldn’t have mass shootings.

We need to regulate guns to keep them out of the hands of men who have been convicted of domestic violence, men who threaten people who disagree with them on social media, men who are members of “incel” (involuntarily celibate) groups, men who strut about in public with their assault-style weapons slung from their shoulders, thrilled that others “respect” (really, fear) them and believing it somehow will make their penises bigger.

Because guns are the problem.

It is not mental illness, either. The VAST majority of people with mental illnesses don’t shoot anyone. In fact, they tend to commit fewer violent crimes. Women have mental illnesses, too, and at the same rate as men, if not higher, but we don’t shoot up Walmarts, theaters or anything else. And the rest of the world has pretty much the same level of psychiatric illness as we do, but they don’t have the mass shootings because they don’t have unfettered access to guns.

Every now and then you’ll read about a person with a knife who manages to kill a couple of people and injure a few more before being stopped, and the gun lovers will say, “See? Knives kill people too!”

But had the knife wielder had an assault-style rifle, the death toll would have been a whole lot higher.

The problem is guns in the hands of angry, racist white men who think they should own and control everything and everyone.

The problem is the racist pig squatting in the Oval Office, egging them on so that he can watch with unconcealed glee as people he wants us to see as enemies are slaughtered.

The problem is Republicans who won’t do anything about gun violence because peddling fear is what gets them elected again and again. Well, that and cheating.

The problem is that right-leaning judges have been pushed by the NRA to interpret the Second Amendment as unfettered access to high-powered military-grade weapons.

The Second Amendment actually says, ” A well regulated Militia, being necessary to the security of a free state, the right of the people to keep and bear arms, shall not be infringed.”

Do you want to join a well regulated militia? You know, attend meetings and take gun-safety classes? Do military drills? Have supervision?

Probably not. These gun enthusiasts want unfettered access to guns they see as toys.

The problem is that guns are everywhere and angry white men love to use them in place of the giant penises they wish they had.