Either way, it’s a victory for Democrats 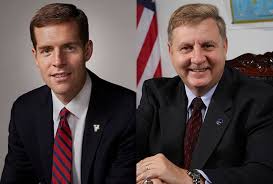 This gives me hope that we can defeat Republicans everywhere in November.

It appears Democrat Conor Lamb has won the seat in Congress vacated by Republican anti-choice philanderer Tim Murphy (you may recall, he resigned his seat in disgrace after pressuring his lover to have an abortion).

He defeated a well known Republican, Rick Saccone, who was a member of the state legislature, endorsed by the local newspaper, and who stood for all the Republican “values.”

The win, if indeed it comes to that after the absentee ballots are counted, is huge.

Even if, in the end, Lamb loses by a few votes, this should scare the piss out of Republicans. This was a safe district for them and they spent $9 million to preserve this seat. It looks as though they failed, but even if they didn’t, they all but closed a 20-point gap. That’s huge. If they can do that, they’ll take every close race for Congress in November.

I understand Lamb stands for a woman’s right to choose. That’s important. But he’s more for fixing the Affordable Care Act than for expanding Medicaid. I would still have voted for him in this special election, even though offering everyone a single-payer system is of paramount importance to me.

See what I did here? I compromised, because electing Lamb is an important step in fixing the mess in Washington. I don’t demand perfection from my candidates because there’s no one who’s going to agree with my every stand on every issue except me, and I’m not running.

We have a very sensible woman running as a Republican in a primary against a man whose stands on the issues are insanely right-wing here in North Carolina. She asked for my support and I turned her down because she will vote with the Republicans if and when she gets to Washington. If she were to pledge to vote for single-payer and against any more restrictions on abortion, if she were to promise to vote against the gun lobby, I might consider supporting her, but I doubt it.

Republicans are wrong on just about every issue, and we as voters have to put a stop to their stranglehold on power. They are dismantling every system they can put their hands on — health care, education, food security (Meals on Wheels, food stamps and school lunches), environmental protection, workers’ rights, justice …

We can only defeat them by registering and voting. Really, we can turn out for marches — women’s marches, health care marches, anti-gun marches, pro-choice marches, workers’ marches … but nothing will change until we all vote.

What happened in Pennsylvania is that people turned out to vote in a heavily Republican district (the current occupant of the White House won by 20 points here). If people had decided they couldn’t win and just stayed home, we would not be celebrating the probable win of a Democrat in this district.

This race is proof that we can defeat Republicans, even in heavily gerrymandered, heavily Republican districts. All we have to do is register and vote — all of us, every last one.