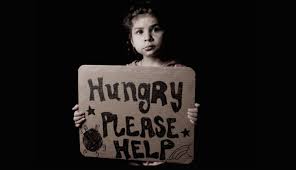 Sorry, GOP, but you can’t call yourself pro-life while letting children go to bed hungry.

If the powers that be in the Republican Party want people to die, then they got it right with this budget.

Get rid of the arts, cut funds for medical research, zero-out PBS and slash funds for education.

And while we talk about how Americans have equal opportunities, let’s cut assistance for college students and then we can call them lazy when they can’t go to college and minimum wage is still less than half of what people need to pay their bills.

Oh, and let’s not help poor people in cold climates to heat their homes. So what if they starve? It’s their own fault for living in a cold place. They should move to Florida or Texas or something.

While we’re at it, let’s slash after-school programs so families that are struggling to get by on minimum wage have no safe place for their children while they work. And then when their children get in trouble, we can say their parents are to blame for neglecting them.

Well, maybe they shouldn’t have children if they can’t afford it, right? Then, why are we closing women’s health clinics? That’s the only place many low-income women have to get reliable contraception. But then, these clowns don’t think women should have access to contraception. Or abortion. We are, after all, pro-life, aren’t we?

Oh, and let’s cut programs that offer nutrition to pregnant and nursing mothers. If the kids don’t get good nutrition for brain development, then they won’t need college anyway.

And we can get rid of programs that help people with their rent in emergencies — you know, if the car breaks down or someone gets sick.

And speaking of getting sick, the GOP plan for health non-care is breathtakingly cruel. It seems intended to kill poor people.

But, hey, let’s fund war. Lots and lots of money in this budget for more war, and for a wall we don’t need, since Mexicans aren’t coming here in great numbers anymore.

I have a question for people who call themselves Christian or pro-life: How can you reconcile your support for these lethal policies that target the poor with surgical precision?

Have you read the red print in the Bible? That’s the stuff Jesus says — and in case you’ve forgotten, Jesus Christ is the person Christians are supposed to be following.

I wish the Pope himself would write to Paul Ryan and tell him his policies are deeply, grossly immoral.

I don’t think anyone can make the occupant of the White House a more moral person. I think he believes his only concern should be with the wealthy and powerful. I think he’s just too cruel, willfully ignorant and immoral to change his ways.

But the Republicans are skipping merrily along, allowing him to wreak havoc across the country and around the world.

This is evil on a massive scale. We must resist. We must persist. And we must find a way to enlist Republicans in the cause. This is not about party; this is about morality. This is about fighting the greatest evil the world has seen since Hitler and Stalin. We can’t afford to lose.