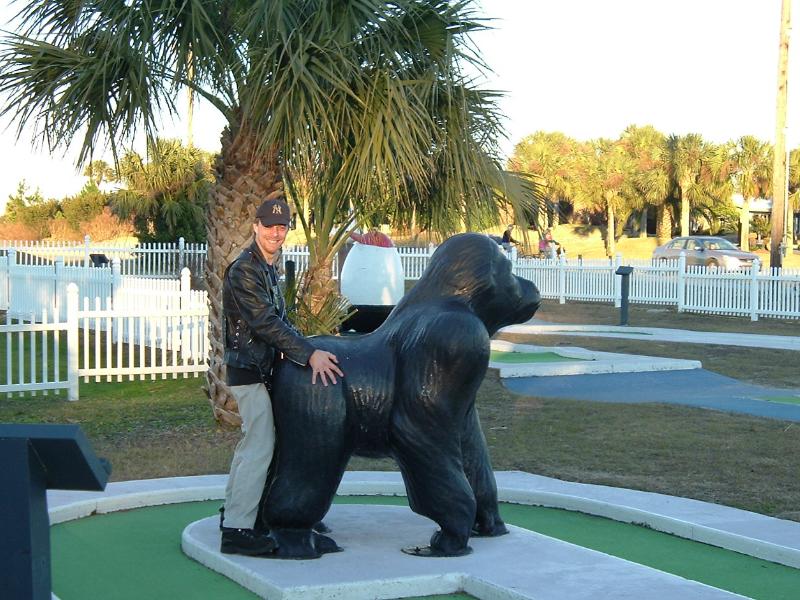 Mike being Mike. His main mission in life was to amuse himself and others. He was a proud jackass and I still believe he chose to leave us on April Fool’s Day.

Ten years ago today, we had a dozen or so people in the house. Along about mid-afternoon, Mike was napping and I was just getting out of the hot tub and drying off when the doorbell rang. I opened the front door to find a very angry woman standing on the steps.
“What the hell is going on with all these cars on my street!” she demanded. “What makes you think you can clog up my street with all these cars? I have to get in and out of here, you know and this is a menace!”
I listened for a moment as she ranted, a couple of my friends standing behind me in utter disbelief that someone could be so nasty without asking what was going on before launching into attack mode over cars on “her” street.
“Excuse me,” I said finally. “These people are here to say goodbye to my son. He’ll be dead in a few days and you can have your precious road back, although I’ve been led to understand you don’t own the road, we all do.”
Her jaw dropped.
“Oh, I’m so sorry.”
“You should be.” I started to close the door.
“Wait! Is there anything I can do?”
“Yes. You can drive carefully. None of us needs to add a wrecked car to our grief.”
A half hour later, Mike woke up and I told him about it. He burst out into a belly laugh. He always loved it when rude people got put in their place.
That would be his final belly laugh.
That evening, all our company would leave and it would be just me and Rob and Mike. James and Janet went back to Raleigh to take care of things there and would come back Wednesday.
Janet would lose her job because her boss said she couldn’t have any more time off. James’s boss would allow him the time he needed to say goodbye to his best friend.
Rob’s and my boss, Randy Hammer, had told us to take whatever time we needed.
Randy had told me a few days earlier he was praying for a miracle, and I told him that was nice. I did appreciate the prayers, I said, but there wasn’t going to be a miracle and I would appreciate it even more if he would pray for strength for those of us who were left behind.
He was a little shocked that I would give up, but I had to be realistic. I didn’t want to have false hope. In my mind, praying for a miracle just means you’re not good enough to get one when it doesn’t happen.
The people in my childhood church always blamed the victim for not praying hard enough or not believing enough when no miracle happened. I won’t fall into that trap. If anyone deserved to live, it was Mike. He was kind and generous, smart and funny. But he would die because he didn’t have insurance and he didn’t have a doctor who gave a rat’s ass about him until it was too late to save his life. He would die, just like 45,000 other Americans that year because our health care system is broken and the powerful people who have all they access they need are too greedy and corrupt to fix it.
Even now, 10 years later, Republicans’ first question on hearing his story is, “Was he working?” As though we have criminalized poverty to the extent that we believe all poor people are lazy, as though unemployment should be punishable by death. And when I say that, the response is always, “Well, some people just want a handout.”
No. Nobody wants a handout. I’ve worked with people in poverty in one way or another for more than 30 years and I’ve never met anyone who just wants a handout. Not one soul. What people want is to live in dignity, working and being paid enough to meet basic expenses in exchange for a week’s work. People want access to health care, a decent education, safe housing, healthy food, clean water — and they should all have these basic things.
For the final three years of my son’s life, he lived in abject poverty because he had to leave his wife to be eligible for Medicaid and it took 37 months to approve the disability payments he had earned over 18 years of working, and his first check didn’t come until nine days after he died.
On this beautiful spring day 10 years ago, we had just two more days with him; 48 hours to soak up enough of his spirit to last a lifetime.